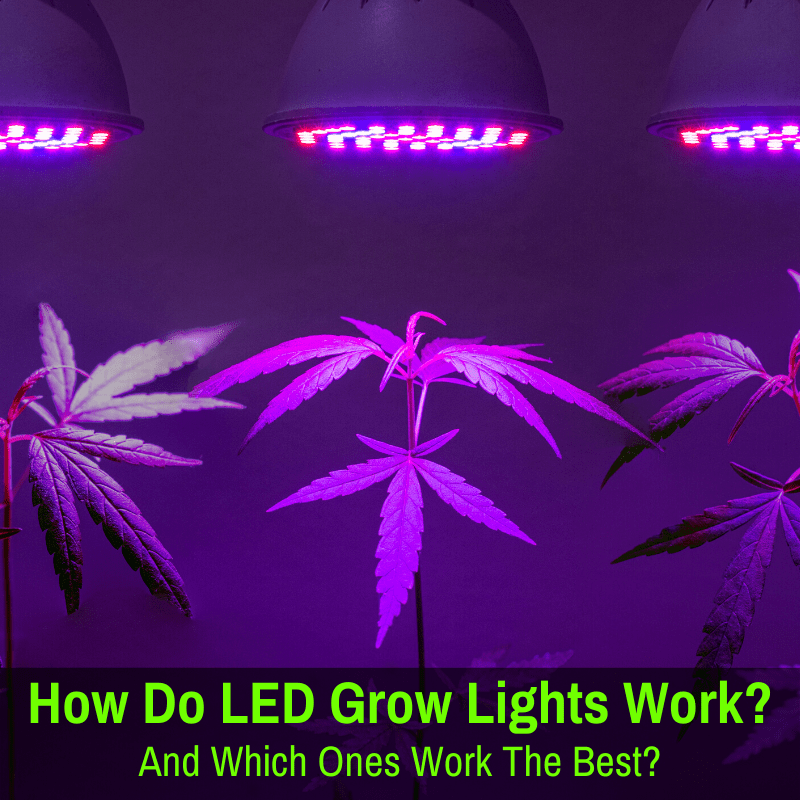 If you’re growing marijuana, that question has certainly crossed your mind. Most likely more than once.

If you’re a new grower, I can make the decision easy for you. Go with LED.

These days, it’s a no-brainer. The reasons for that are all below.

But if you have been growing successfully with HID for years, the decision to switch to LED is not quite so simple. HID works. It works well. And you’ve already got the growing process down pat. You know exactly what you’re doing.

Growing with LED is different and there will be a learning curve. And while you are learning, your yields will probably suffer.

But what about once you’ve got it figured out? Do LED grow lights really work? More importantly, do they work better than HID? And how do they work exactly?

Yes, LED grow lights work very well. Even the bad ones work to some degree and the best ones work better to grow plants better than any other grow lights currently available.

The reason they work so well is that LED technology allows manufacturers to outfit their fixtures with the exact colors of light that plants need, in the exact ratios to maximize growth and yields. They also cost less to operate and they generate less heat. And they are no longer prohibitively expensive.

That’s the quick answer. And it may have raised additional questions in your mind. Those will all be answered below. Let’s begin by taking a look at the actual science behind these lights.

How Do LED Grow Lights Work?

Ok, so we know that light emitting diodes work well to grow plants, and especially to grow cannabis. But how do they work exactly and what is it that makes them so good for plants?

Let’s begin by taking a look at how light emitting diode technology works in general. Then we’ll see why it works so well for indoor gardening.

How A Light-Emitting Diode Works

A light-emitting diode is a simple semiconductor that emits light when a current is sent through it. Semiconductors are generally made from material that does not conduct electricity well at all, like silicone, but with an impurity added that makes it more conductive. Adding these impurities is called “doping.”

But semiconductors are only conductive in one direction. If you reverse the current, they do not conduct electricity. That is the reason they are called semiconductors.

The reason for this is that two layers are used, each doped with a different impurity. One layer is made up of n-type material. It is called n-type, because it has a negative charge, due to an excess of electrons. Phosphorus or arsenic are commonly used, because each has 5 electrons, which leaves one free when added to the silicone with its 4 electrons.

The other material is called p-type, due to a positive charge from a lack of electrons. Boron or gallium are commonly used, because they only have three electrons. When added to the silicone, the lack of a 4th electron creates a hole.

When the electrons combine with the electron holes, they release energy in the form of photons. This creates light. The color the light takes is determined by how much energy is needed for the electrons to cross the gap (the depletion zone) in the semiconductor.

How Does LED Light Work As A Grow Light?

One of these semiconductor diodes is fairly weak, but if you combine many of them, you can get a very bright point of light, like the LED chips used in grow lights. Even the smallest ones are quite powerful and the larger ones, like COB LEDs, are incredibly bright.

Because an LED fixture is made up of multiple larger diodes, and each diode is in turn made up of many small points of light, you have the flexibility to combine many different colors of light in the same fixture. This is a unique advantage of LED grow lights and it allows you to achieve the exact mix of colors that plants need.

As you can imagine, the difference this makes is huge. But the big knock on LED grow lights has always been the much higher cost. Luckily, that is no longer the case. Let’s take a look.

Are LED Grow Lights Worth It? 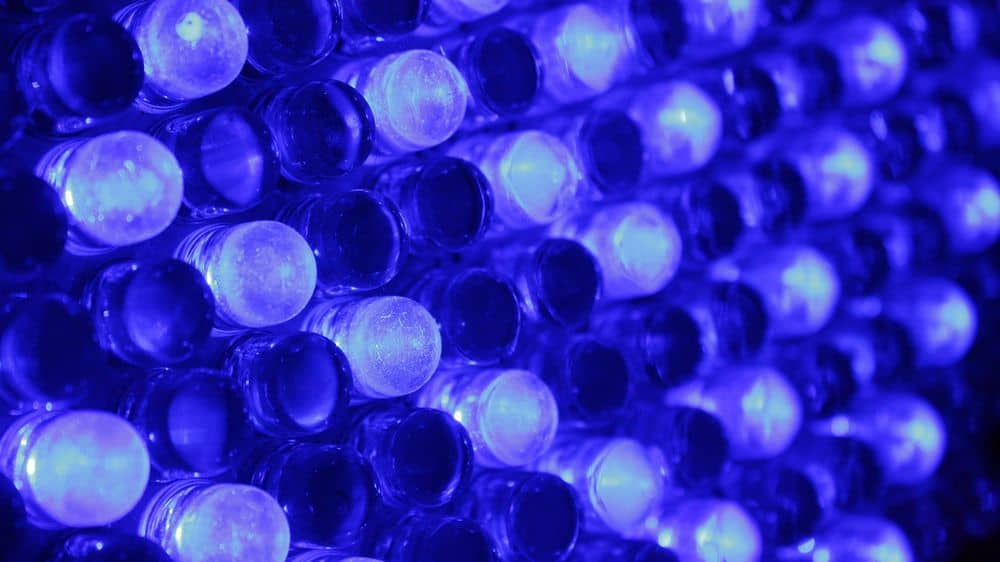 Yes, LED grow lights are most definitely worth it. They have numerous advantages over all other types of lighting. Granted, they have some disadvantages as well, but those are far outweighed by the pros.

And what was one the biggest disadvantage, the high cost, is no longer one. Great LED grow lights are now available for the same, or even lower, price as an HID system.

Notice that I did not list ‘high cost’ as a disadvantage. That is because the cost of LED lights, even quality ones, has come down so far that they only cost slightly more than the cheapest HID fixtures.

As long as you know which brands produce quality lights and which don’t (and price is not always an indication of this, sadly), you can get an excellent LED plant growth light for very little money these days. So which ones are the best?

Which LED Grow Lights Work Best (And Sell For A Reasonable Price)? The most important thing to look for when buying an LED grow light is that it gives you a high output for less input. That means, you want a lot of light to come out of the fixture (measured in umols, or sometimes in lumen), while less power needs to go in (measured in watts).

Watts are not a measure of output.

If you read or hear that a light “puts out” a certain wattage, run away from that brand, website, person, etc. It is blatantly false.

Watts are a measure of electricity and no light outputs wattage. It consumes wattage. It outputs lumen or umol. You will often see the letters PPFD or PAR as well. These both generally refer to the umol/s.

The other major thing to look at is the spectrum. Ideally, you want a fixture that provides light in every color of the visible spectrum, plus IR and UV wavelengths, but that has peaks on the red and blue wavelengths.

That said, IR and UV light is not all that important. Some swear by it, but there is not much proof that is makes a huge difference. And UV light can be harmful. It is the reason many ask: can LED grow lights cause cancer?

Coverage area is also important. This not only means the area a light can cover, but how evenly it covers that area.

A light that sends most of its power to a tiny circle directly beneath it, and only slightly lights up the areas surrounding that central portion, is not useful to most indoor growers. It is only good if you are growing a single plant directly beneath the light.

And finally, you do not want to overpay for your light.

Some brands are great at marketing and have convinced people to pay twice as much for their lights, even though they are essentially the same as many cheaper lights. It’s fine if you want to buy one of those (assuming they are good lights, of course), but most of us prefer to pay less, if we’re basically getting the same thing.

So which lights fulfill all of these requirements the best?

Currently, there are two types that stand above the rest: COB LED lights and the quantum board style lights. They both emit white LED light and they’re both excellent. Which one you go with will be a matter of personal preference (see a detailed comparison here).

For COB lights, Optic LED is the primary brand, but not the one I recommend. Phlizon makes essentially the same lights, but charges half as much for them. There is no reason to pay more for an Optic light.

Plus, Optic is a pretty terrible company. Their customer service and quality control are on par with some of the worst Chinese brands. Phlizon does better.

You can find a full review of Phlizon’s COB lights here.

For the quantum board lights, Horticultural Lighting Group, known as HLG, is the top brand. They coined the phrase “quantum board” and popularized this type of light. They’ve had some issues with customer service in the past, but have made huge improvements in that area and they have brought their prices down considerably too.

You can find my review of HLG lights here.

Their main competitor is Spider Farmer. They make similar lights and charge less for them, but the difference is not as great as it is between Optic and Phlizon. For that reason, I won’t strongly recommend one over the other. I’d go with Spider Farmer due to the lower price, but would be perfectly happy to pay a little more for an HLG light as well.

Hopefully you now have a better idea of how LED grow lights work and also which ones work best to grow and flower plants like marijuana. These days, you can get great LED grow lights for only slightly more than an equivalent HID fixture.

Since LED costs less to operate and lasts longer, there is no good reason to go with HID lights anymore. LED lights work better, cost less to operate, and in many cases even cost less to buy. A few years ago, this was a difficult choice. Today, the choice is easy.