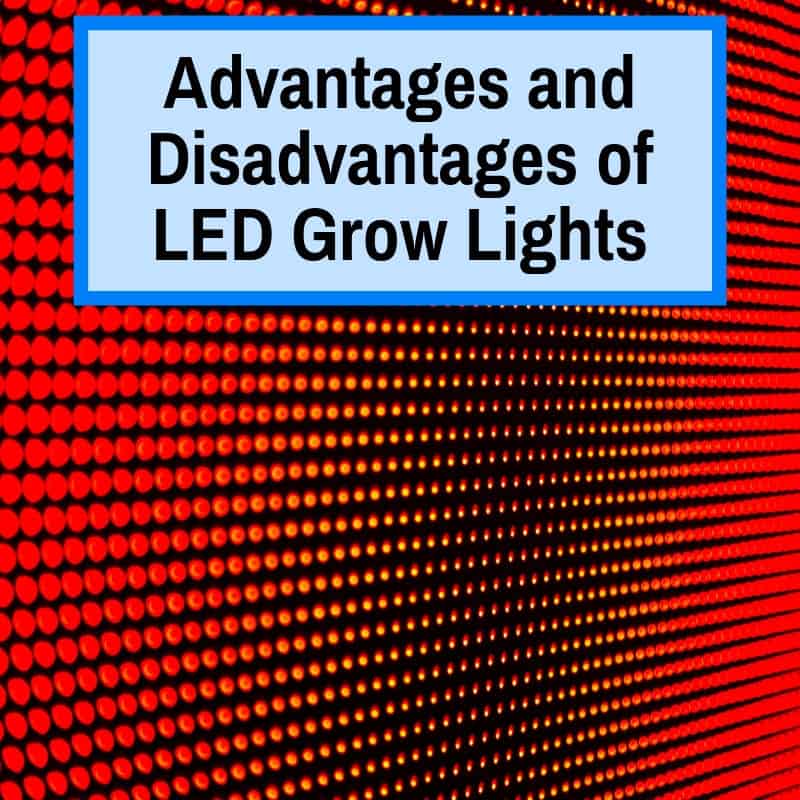 LED grow lights are on top of the world.

When it comes to farming indoors, LED lighting technology has been soaring in popularity.

If it hasn’t overtaken traditional lighting systems yet, it will do so very soon.

LED lights are the technology of the future and they have a number of huge advantages over other types of horticultural lighting.

That said, they also have several disadvantages.

But those disadvantages are rapidly disappearing, as manufacturers are making their lights more efficient and cheaper.

Before long, there will be nothing that HID lighting (or other forms of lighting) can do better.

Let’s take a look at the main pros and cons of LED grow lights.

These are the biggest pros of using light-emitting diode technology to light your plants.

LED grow lights can be used for 24 hours a day with little effect on temperature. When growing plants indoors, lack of environmental feedback means the plants rely on you to tell them what season it is and with it, how they should behave.

The use of LED lights enables you to change the daylight hours and the amount of red wavelength light at the exact right time to maximize the plant growth rate.

When LED light is used to grow auto flowering plants, multiple harvests are possible in one season. You is able to alter flowering times in plants and increase production.

LED grow lights have a lifespan of over 50,000 hours, which is much longer than traditional lighting systems. A large reason for this is the low operating temperature of the lights.

LED grow lights are more efficient than traditional lighting systems, consuming 60% less energy to give the same level of light.

They emit less heat and provide more usable light than traditional lighting systems. This is because an LED diode does not burn anything to produce light. Due to their reduced energy use and heat production, LED grow lights lower energy bills considerably.

Light sources that emit more UV rays, IR rays and heat are counterproductive to plant growth. This is because they can cause plants to burn and dry up quickly, which leads them to need more water and energy to stay alive.

With LED grow lights, heat and harmful wavelengths of light are limited. As a result, the water and energy is used to grow and develop healthier plants and not to merely survive.

LED grow lights enable us to regulate the wavelengths of light, which means we can give plants the exact light they need for photosynthesis (the action spectrum).

It is wasted energy.

With LEDs, you can give the plants the exact spectrum of light they need. No light goes to waste and you get the most our of your energy dollar.

The best LED plant lights produce a balanced full spectrum of light. As mentioned above, they give you all the light your plants need and nothing more. Don’t go for the “blurple” lights. The idea that plants need only red and blue light is outdated.

Plus, most fixtures allow you to turn off specific wavelengths, so you can produce the perfect light for every stage of plant growth. This means that LED lights are actually better for your plants than natural light.

LED grow lights do not give off a lot of heat. This is unlike HID lighting systems that produce temperatures approaching 400 or more degrees.

LED light does not much affect the operating temperature in a greenhouse or grow room. LED plant lights eliminate the need to install cooling systems in your grow area.

LED grow lights are 100% recyclable. Unlike HID lights, they do not contain toxic substances like mercury. To ensure this, all quality LEDs are certified by RoHS.

Despite their many advantages and growing popularity, horticultural LED lights do have some drawbacks.

LED fixtures provide light that is directional like a flashlight. The area they cover is generally smaller than that covered by traditional lighting systems. Newer lights have addressed this issue.

LED grow lights are much more expensive than HID or fluorescent lights. At least good ones are.

You can find some that are actually cheaper than HID lights, but those are not very good.

That said, these days there are a couple of quality LED companies that sell their lights at a very low cost. You can even get fixtures for less than $100.

LED grow lights produce a bright blue light (in addition to other colors) which can cause blindness in humans.

LED diodes may also begin to change color as they get older. Despite having a long lifespan, as they age, they may fail to consistently produce the expected quality of light.

This is much more a problem with cheaper LED chips. If you get quality lights from a reputable company, you won’t have to worry about this issue.

LED grow lights are almost certainly the future of the horticultural industry. Even today, the pros far outweigh the cons, with the higher cost being the only serious drawback. And that drawback is vanishing fast as prices drop. The best LED plant lights work so well, they easily outdo any other type of horticultural lighting on the market today.