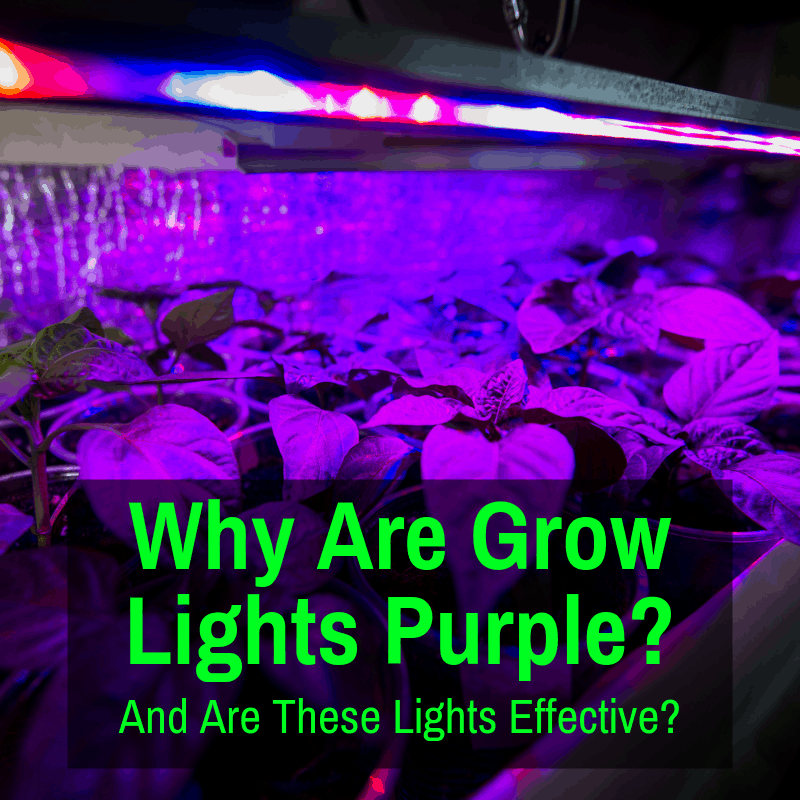 Only LED grow lights are purple. And only some.

Why are they purple?

The light appears purple due to the differently colored diodes in use: mainly blue and red. This pinkish/purplish glow has also been dubbed “blurple”, a term that is often used in a somewhat derogatory way these days.

Because many of the earliest LED grow lights, especially the low quality ones from China, emitted a “blurple” light. And people who bought those lights got burned.

They ended up with a light that couldn’t grow a blade of grass and understandably developed a negative impressions of purple lights.

Is that impressions justified? Yes and no.

We’ll get into that a bit more below. First we’ll go into more detail on why these grow lights look purple.

Why Are LED Grow Lights Purple?

LED grow lights have multiple diodes that each emit a single color of light. Some have only white diodes, while others have diodes in various different colors. It is the combination of those colors that creates the light we see.

Fixtures that emit a purple light contain a large amount of red and blue diodes. The smaller the ratio of red to blue, the more purple the light looks. The larger the ratio, the more pink it appears.

Since red wavelengths are the most important for plant growth and plants like a ratio of around 5 to 1 of red to blue light, most LED grow lights actually contain more red than blue diodes. This means that their light is actually more pinkish than purplish. It is the “blurple” light I mentioned above.

Why Do LED Grow Lights Use Mainly Red And Blue Diodes? Plants use mostly red and blue light for photosynthesis. They use about 5 times as much red light as blue, and far more of either than any other color.

Many LED manufacturers took this knowledge and constructed grow lights featuring nothing but red and blue diodes.

They said that using white diodes would mean lots of light in other wavelengths like green and yellow, which plants don’t use. You would essentially be paying for electricity to create light that just goes to waste.

With only red and blue diodes, all of the electricity is used to create light that plants absorb and turn into energy. That is why their LED fixtures had only blue and red (and sometimes a few white) diodes.

Or so they claimed.

In actuality, they used mainly red and blue diodes, because they are easier and cheaper to make.

But consumers bought into the “red and blue light only is best” myth. At one point, it was very hard to find lights that were not mostly red and blue.

So why do I call it a myth? Is red and blue light bad?

No, it isn’t. It works just fine. But it is not ideal. But more and more, we are coming to the realization that full spectrum white light is better for plants. It turns out that, while plants don’t use green or yellow light as much during photosynthesis, they do make use of some.

Besides, sunlight is white light that contains all colors of the spectrum. And sunlight has been growing plants since long before humans ever even walked the earth.

HID lighting hasn’t been used for growing quite that long, but it has been in use for decades. And it is also white light.

Both do not contain all colors in similar amounts, like sunlight, but both are still white light. Newer ceramic metal halide bulbs come much closer to natural sunlight, containing a very similar spectrum.

The light from white LED diodes also contains a spectrum similar to sunlight and CMH bulbs. Both white LEDs and CMH bulbs are much more effective at growing and flowering plants than LED fixtures with only red and blue diodes.

But there is an even better spectrum for plants than this.

What Color Spectrum Is Better Than Purple?

As mentioned, plants want light in every color of the spectrum. But they want more blue and even more red, than any of the other colors. Thus, it stands to reason that the best light for plants contains all colors, but contains an extra heavy dose of red, and more blue than other colors, but less than red.

And that is the ideal spectrum. Almost.

Adding in a bit of UV and IR light has been shown to improve yield qualities, so having some light in the UV and IR wavelengths is even better. Learn more about the best color lights for plants here and about the effect UV light has on them here. In short, what we want is a spectrum like the one shown in the chart above. One with light in every color, but a large peak on red and a smaller peak on blue. In addition, small tails that extend from the blue side into the UV wavelengths and from the red side into the IR wavelengths.

How Do We Get This Ideal Spectrum?

These days, there are a lot of LED grow lights that provide the ideal spectrum. But there are only a handful that do it efficiently and also sell for a reasonable price.

Black Dog lights, for example, have a great spectrum. But have you seen their pricing? The Phytomax-2 1000 costs over $2000!

It is possible to get the same great spectrum while spending far less. Let’s look at some of those lights.

They are much cheaper than Black Dog, but still cost quite a bit more than Chinese brands (HLG lights were once made in China, but they have since moved their manufacturing to Tennessee). Read my review of HLG grow lights.

Mars Hydro’s newest lights also use all white diodes and some of their new fixtures also combine those with deep red diodes. They are very similar to HLG lights, but with a much lower cost. Read my review of the Mars TS and SP fixtures.

Neither of those options have UV light and only the ones with far red diodes have IR light, but only a small amount. To get both UV and IR, along with all colors and peaks on the red and blue, your best bet are COB LEDs.

The Phlizon lights have full-spectrum white COB LEDs, plus additional diodes that provide red, blue, UV and IR light. In short: they have the perfect spectrum for all stages of plant growth and are especially great at flowering.

COB LEDs have taken the growing world by storm. Not only have a great white light spectrum, but they are also incredibly intense and achieve a much deeper canopy penetration than other LED diodes. I’ve written a whole article on why COBs are great for plants.

For years, Amare were the only good provider of COB LEDs. They still are a good provider, but they are expensive. Optic LED then came along and sold very similar lights for less. But they are also still expensive.

Phlizon sells fixtures that are virtually identical to the Optic lights, but cost half the price. That is why I recommend them in both of the article mentioned above. Read my review of the Phlizon COB fixtures here for more.

These days, most grow lights are no longer purple. The blurple spectrum has fallen out of favor and been replaced by the all-white spectrum of the quantum board and bar style lights.

Those fixtures usually use Samsung LM301B all white diodes, with some additional diodes adding deep red and sometimes infrared and ultraviolet. IT is a spectrum much closer to sunlight than the blurple spectrum and thus great for growing and flowering plants.