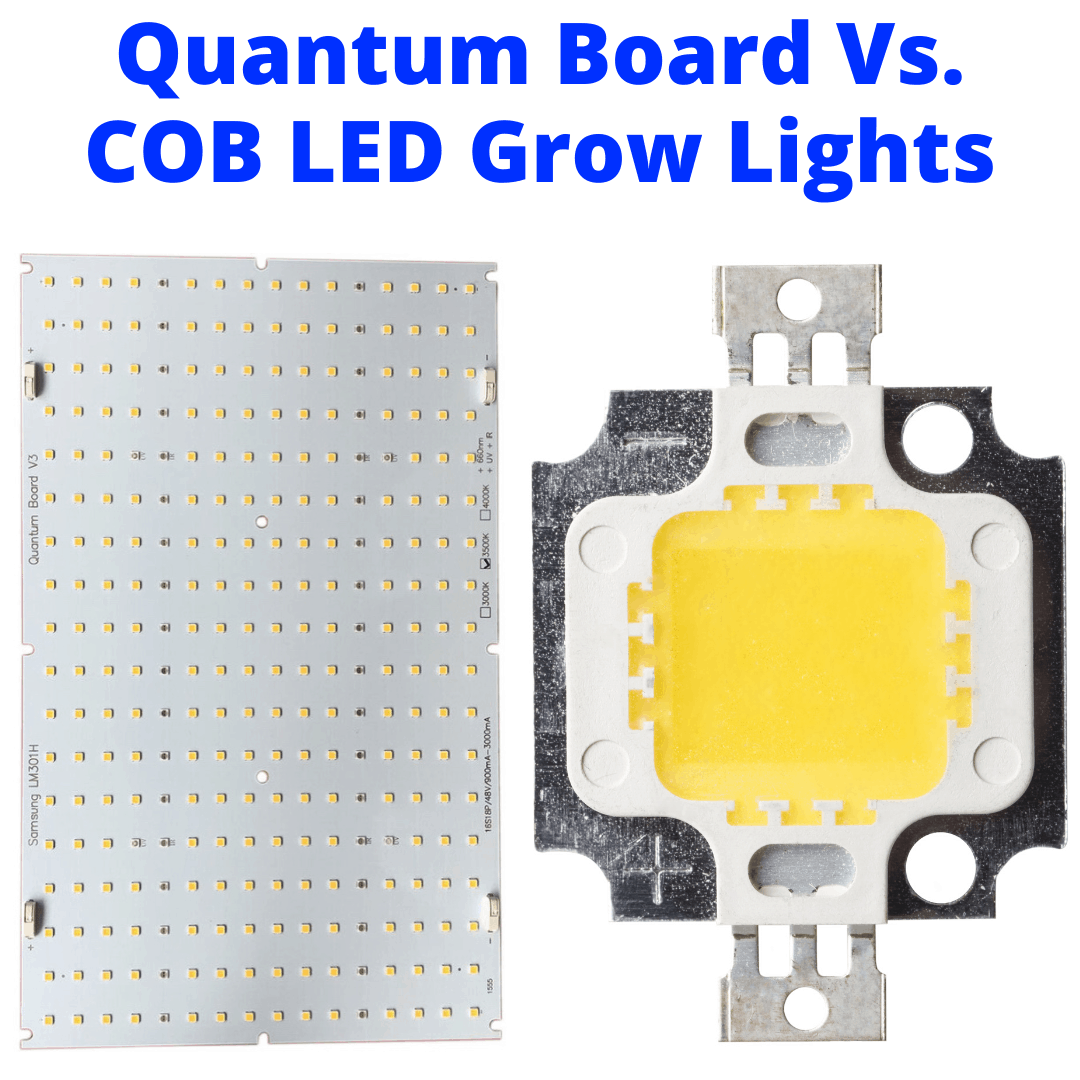 First COBs took the industry by storm. Then quantum boards did the same.

Does that mean that QBs are better? An improvement on COBs?

Both are great lights for plants and each has its advantages and disadvantages.

We’ll take a look at those pros and cons, and help you figure out which one is right for you.

By the time you get to the bottom of this page, you will not only know which type of light you need, but also which brand can best meet your needs.

That’s not always easy, because there are a lot of brands making all-white COBs and quantum lights, but most are not very good.

And even among the good ones, there is a lot of variation. You want to make sure you find the right balance between cost, ease of use, reliability and performance.

Let’s get started with our comparison of COB and quantum board led grow lights.

COB fixtures and quantum board fixtures look completely different, but they actually have quite a few similarities. Let’s cover those first, before moving on to the differences between the two.

If you want more general information on either type, read What Is A Quantum Board? and Are COB LED Grow Lights Better For Plants?

Similarities Between COBs And Quantum Boards

There is a reason these two types of lighting both had a revolutionary impact on the industry. They have several similarities and they are exactly the things that make them so appealing to indoor cannabis growers.

The main similarity is that both essentially use the same principle. It is simply the scale that differs.

A COB is made up of many tiny LED diodes tightly packed onto a single chip to produce a single, powerful beam of light. A quantum board also has many LEDs on it, but those LEDs are more powerful and more spaced out. Essentially, a quantum board is simply a very large COB.

The other major similarity is the color spectrum. Both COBs and quantum boards use full-spectrum white LED diodes.

While “blurple” lights dominated in the past, the industry is coming to realize that white light is actually better for plants. That realization came about thanks to the popularity of COBs and quantum boards.

But it is true that plants especially like red light (and blue as well), so many quantum and COB LED fixtures now have supplementary diodes that add a bit of red, and sometimes UV, IR or blue as well.

Both quantum boards and COBs are great for building your own lighting system. Several manufacturers of each even offer DIY kits that include all the components you need. All you have to do is put it all together. Alternatively, you can save even more and do it completely on your own, without the use of a kit.

Differences Between COBs And Quantum Boards While they are based on the same principle and they both use LEDs with an all-white color spectrum, the difference in scale makes them very different light sources. These are the main differences between the two.

The first major difference is in the way the light fills the coverage area. A COB is a single point of powerful light, that then emanates outward from that point. This means it has further to travel to reach the outside of the coverage area than it does the middle.

A quantum board is large and has diodes spread out across the entire surface area. That means that the light travels more directly to the canopy across a larger area, not just dead center.

The result is a much more even light spread for quantum boards. COBs give you a ton of intensity in the middle of the coverage area, but it drops off more toward the outside than a quantum board light.

Our article on the coverage area of a 1000w light goes into a bit more detail on light spread and what to look for.

This is the flip side of the previous difference. Because the COB is such a powerful beam of light, it naturally penetrates deeper below the canopy, at least in the middle of the coverage area. Toward the outside, that penetration power diminishes considerably. Quantum boards get great penetration, too, just not as good as a COB (in the middle anyway).

Because COBs are such a powerful source of light, with many tiny diodes crammed onto a small surface area, they naturally emit a lot of heat. Single COBs can be cooled by heat sinks alone, but fixtures with multiple COBs need to have fans.

Quantum boards are always passively cooled. Usually this is done with a simple aluminum board, but sometimes a heatsink is used instead.

The fixtures as a whole still emit about the same amount of heat as other LED fixtures, including COBs, but because the individual diodes are spread out, passive cooling is enough to keep them from overheating.

Should I Get A COB Or A Quantum Board?

Either light works great to grow marijuana or any other type of plant, so you can’t go wrong whichever way you decide to go. But for most people, one type will be more advantageous than the other. Your decision will come down to a few key factors.

Why To Get Quantum Board LEDs

We recommend quantum boards, if you want a more even light spread. They are also the better choice if you have limited vertical space, since you can hang them closer to the plants.

Which QBs To Get

The best known (and most expensive) manufacturer is HLG, who introduced the first quantum boards to the market. Since then, many other brands have started making them. The following are the best.

Horticulture Lighting Group is the brand that started at all and they still make the top quantum board LED grow lights and DIY kits on the market. They have a relatively small selection, but the lights they do have are exactly what you need to grow indoors.

Spider Farmer is the top Chinese brand currently making quantum boards. They use the same components as HLG and have even improved on HLG lights in some areas. SF have a small selection, but their lights sell for much less than HLG, so they make a great alternative for growers on a budget.

Check out our review.

Is another step down in terms of quality. They are one of the best known Chinese brands, but they are known for deep budget lights that save you money, not for amazing customer service or superior quality control. They are a typical Chinese brand, but one of the better ones.

Viparspectra actually has two series that use quantum boards. The Pro series uses no-name components and is cheaper, while the XS series costs more, but uses MeanWell drivers and Samsung LED chips.

Mars Hydro is also a step below Spider Farmer in terms of quality and price. They use some cheaper components, which results in a lower cost. Like Spider Farmer, Mars has a service center in the US, which is great if you need warranty repairs.

Bloom Plus is another Chinese brand that offers budget lights. They are very similar to the previous two manufacturers listed here.

Kingbrite lights are only available direct from China on Alibaba. This means increased risk and the potential for a lot of hassle, if something goes wrong. But that risk comes with a huge reward.

Kingbrite lights use the same components as HLG, but they sell for much less. Kingbrite also has a much larger selection, so you have a ton of different configurations to choose from, both ready-made and DIY (including DIY kits).

Meijiu is very similar to Kingbrite, but with a smaller selection. If you’re thinking of getting a quantum board LED grow light from Alibaba, I’d check out both of these suppliers (both have proven to be more reliable than most of the others) and see which has the light you want for a better price.

Why To Get COB LED Grow Lights

COBs make sense if you want better penetration and if you want smaller lights that are more flexible. If you use single COB fixtures, you can easily arrange them in just about any configuration you can imagine.

Which COBs To Get

The best known COB fixtures on the market come from Optic LED and Amare, but the Chinese brand Phlizon makes essentially the same lights as Optic LED, and sells them at a much lower price. For DIY COBs, Rapid LED are now the only good brands.

Phlizon is our recommended manufacturer for COB fixtures, because they make lights that are virtually the same as Optic LED lights, but cost far less. They use warm and cool COBs (3000K and 6000K) and surround them with supplementary diodes in red, blue, white, IR and UV. These diodes provide a huge bloom boost.

Read our review of Phlizon lights for more.

Aglex fixtures are very similar to Phlizon, but they use cheaper components, which means their fixtures cost less. They also have a slightly different spectrum, because they use cooler COBs (3500K and 7000K), but far more red supplementary diodes.

Rapid have a number of ready-made lights and DIY kits, that are primarily made up of their single CREE CXB3590 COB fixtures. These lights come in multiple different color temperatures and their small size offer you maximum flexibility in terms of configuration.

Quantum Board Vs COB: Final Thoughts

Quantum boards give you a better light spread, while COBs give you better canopy penetration. For most people, quantum boards will be the better choice.

Since the publishing of this article, bar style lights have shot past quantum boards in terms of popularity. They are actually very similar and everything said about quantum boards goes for the bar lights, too.

The brands we recommended for quantum boards are also the best choices for bar lights (they have all started making bar lights as well), with the exception of HLG. The inventor of the quantum board has not jumped on the bar light bandwagon.