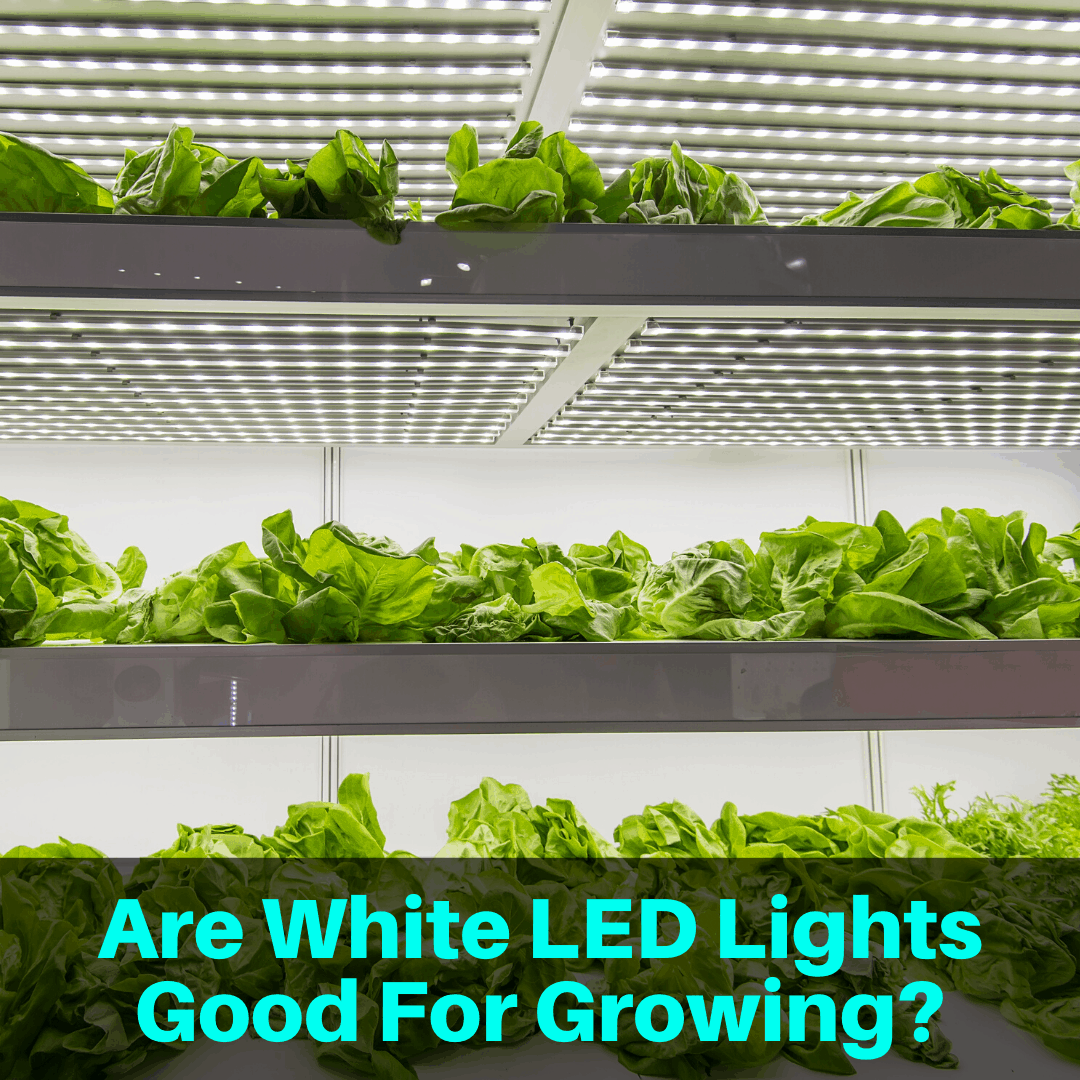 It just keeps getting more confusing.

First we were told that plants want red and blue light, because other wavelengths, like green and yellow, are not absorbed during photosynthesis.

Giving your plants white light, which contains a lot of green and yellow wavelengths, means paying for a lot of light that simply goes to waste.

We were told that is why LED fixtures with red and blue diodes are more efficient. You are not wasting money on electricity to create light that plants don’t even want.

And it made sense.

But now we are being told the opposite. That full-spectrum white light is, in fact, better.

And it makes sense too.

So what’s the truth? Is white light any good for growing plants?

Short answer: it is. It is better than LEDs that have only blue and yellow light.

And by adding additional diodes, we can make it even better. But before we get to that, let’s take a closer look at what a white LED light actually is. Because it’s not white.

What Is A White LED?

Let me explain what I mean and clear up a misconception at the same time. White LEDs aren’t actually white.

The first “white” LEDs were actually a red, green and blue LED packed into a single diode. Mixing these three colors together leads to white light. Altering the proportions of each gives different color temperatures.

This same combination of three LEDs, often with a fourth added in to flesh out the spectrum, is still used today for some applications. But it is not the way the “white” diodes that we see in grow lights are made.

Using three differently colored LEDs together is obviously not the most efficient way to create white light. For that reason, another method was developed that only uses a single LED.

These LEDs used the same principle that was already in use with fluorescent lights. Fluorescent tubes actually produce ultraviolet light, not white light. A powdered coating on the inside of the tube converts this UV light to red, green and blue light. And, as mentioned, the combination of those three colors appears white.

LEDs that emit an ultraviolet or violet light, which is then converted to white light by a phosphor coating on the lens or other enclosure, is called a full-conversion white LED. These work, but they are not efficient.

That spurred researchers to try and create a partial-conversion LED. These use blue light instead of UV and the phosphor coating converts part of that blue light to a yellowish light (made up of red and green). That yellow combines with the remaining blue to create white light.

Since only part of the blue light is converted (as opposed to the whole UV light), this type of diode is much more efficient.

And the efficiency has continued to increase to the point where white LEDs are now the most efficient lights on the market. Especially ones with added colored light, but we’ll get into that in a minute.

When these phosphor-coated diodes were first introduced, the spectrum was fairly narrow. But the use of difference phosphors and different blue wavelengths led to ever-broader spectra.

If you look at the spectrum of a popular white LED grow light, you can see that today’s white LEDs give you a true full spectrum light with output at every wavelength.

What Is The Wavelength Of White LED Diodes?

As you can see from the spectral chart above, today’s white LEDs emit light in every visible wavelength. How much of each wavelength they give you depends on the color temperature of the light.

How do you alter the color temperature of a white diode?

It is simply a matter of using a thicker phosphor layer and altering the wavelength of the blue LED beneath the phosphor coating. Modifying these two variables allows manufacturers to change the color temperature of their LEDs.

Let’s take a look at some of the more common color temperatures and see how they compare and when you would want to use them. When it comes to LEDs, you generally find either 3000K or 3500K. 2700K is not common in LEDs, but is the color temperature of many HPS or CMH bulbs.

The lower color temperature (2700K) is better for flowering, but if you are using your light for every stage of growth, you would be better with something slightly cooler, like 3000K or 3500K.

Both 5000K and 6500K white light is great for growing plants, but not as great for flowering them. It will still work fine, but a warmer color temperature would work much better.

As a result, I would only recommend cool LEDs like these if you are vegging and nothing else. If you will also be using the light to flower, you want a color temperature of 4000K or lower. If you are vegging only, then 6500K light is better than 5000K, though both would work great.

5000K light contains more red than a 6500K light. Red light actually helps a lot during vegging too, but since the cooler light also still contains quite a bit of red, it is better if only vegging.

6500K LED light is definitely a vegging specialist. If you plan on doing nothing but vegging or cloning, then a cool light like this is ideal. If you are curious why bluer light is especially good for vegging, read up on how blue light affects plant growth.

That brings us back to our original question. And the answer is a resounding “yes.” White LED lights are great for growing plants.

But isn’t it true that plants want mostly red and blue light and that green and yellow light goes unused?

Doesn’t that mean that white light is less efficient than a “blurple” LED?

As we’ve been learning more about the effects of different colors of lights on photosynthesis, we have come to realize that green light is not as useless as we thought.

Green light actually penetrates deeper into the canopy of plants than other colors. This means that a fixture with a healthy amount of green will stimulate growth further beneath the canopy than a light that does not contain green wavelengths.

In the end, white light has a great effect on plant growth. Because it contains a lot of green wavelengths, it results in stronger growth. It also results in great yields, if it is a warmer white light with a healthy amount of red wavelength light.

And if you add additional red diodes to the mix, you get a light that flowers even better. This is exactly what many of the most popular LED manufacturers are doing these days.

If you look at the best LED grow lights on the market today, they all use mainly white diodes (in some cases COBs). But they no longer use only white diodes.

All of the brands we just mentioned offer fixtures that use mostly white LEDs. Since the industry is moving in this direction, it should come as no surprise that these are also some of the most popular brands on the market today.

And they are ones that give incredible results that outdo the equivalent HPS lights. White LED lights are simply better and they are taking over as a result.

As for using other kinds of LED lights to grow plants, it does work. Any light can grow plants, but dedicated grow lights do so much more efficiently, since they have been designed for the purpose.