You are here: Home / Grow Light Advice / LED Grow Lights Vs HPS: Which One Do You Need? 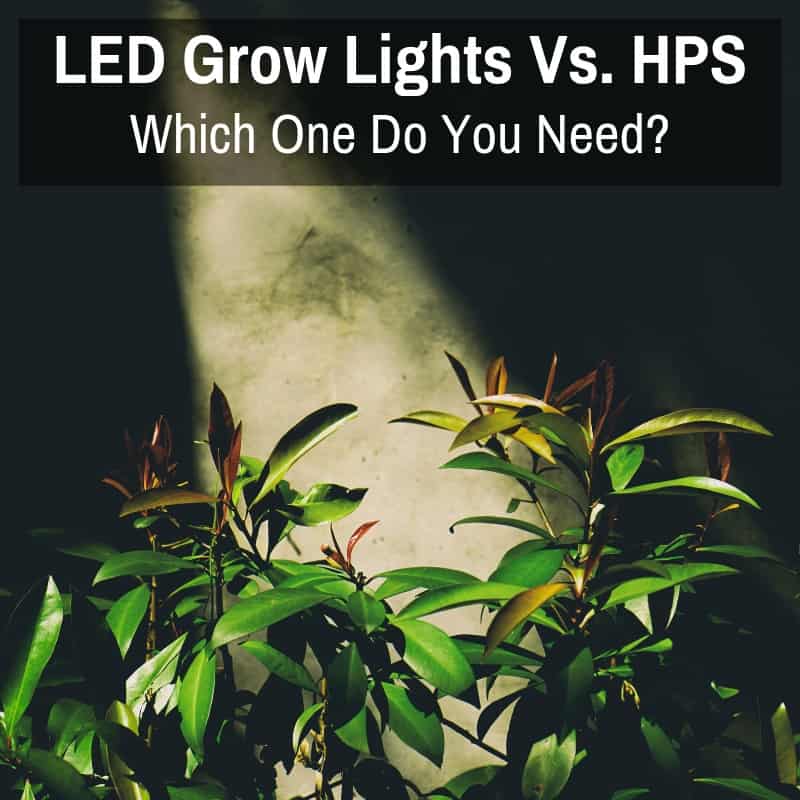 It can actually be a bit complicated.

Farmers, horticulturists, gardeners and medical marijuana growers all need different features and they have a very broad selection of options to choose from.

The first big decision is between LED grow lights and HID lights, which include HPS and MH bulbs.

Light emitting diodes, (LED) are relatively new in the horticultural and many people are not yet familiar with their benefits and drawbacks. HID lighting has been used in the industry for decades and has been the system of choice for indoor gardeners.

One of the deciding factors in choosing between LED grow lights and HID lights is that LEDs typically cost far more than an equivalent HID system.

For many, this is the only factor that matters and this is the main reason HID lighting continues to enjoy huge popularity. That said, a select few companies are now making good lights that cost very little.

Here is a list of the best LED grow lights under $100.

There’s a reason for this.

LED grow lights use far less energy to generate the same amount of usable light as an HPS or an MH bulb. This drastically reduces operating costs and means that they turn out to be more affordable in the long run.

Furthermore, LED diodes have a much longer lifespan than HID bulbs, so you save even more by not having to replace the bulbs once a year. It is also much less of a hassle and those bulbs contain mercury, so disposing of them is bad for the environment.

Finally you have to consider the heat output of each lighting solution.

HID bulbs emit an enormous amount of heat, which will have to be dealt with. Cooling equipment is not cheap and neither is running it.

Since LED lights run much cooler than HPS or MH lights, you save even more in operating costs. On the flip side, if you are using LED plant lights, you may actually have to heat your garden in the winter months, if you live in an area with a cold climate.

The Benefits Of LED Grow Lights

Here are some of the main benefits of using LED lights for your garden.

The primary advantage of LED grow lights are the lower operating expenses. Good LEDs cost up to 80% less to operate than equivalent HID bulbs.

Whether you use them as your main light source or just as supplemental lighting, they can begin to pay for themselves within 6 months of frequent usage, although most cost so much more initially, that is takes 2-3 years to break even.

LED fixtures are ready to start growing immediately. You just have to hang them, plug them in and that’s it. You don’t need to purchase any additional components.

HID lighting on the other hand, is not so simple. In addition to the bulbs, you have to purchase a reflector and a ballast. The bulbs will not work without a ballast and without a reflector, the light will go off in every direction, which is a huge waste and would further increase operating costs.

Fluorescent bulbs also require thee same components, although the ballasts are smaller and usually integrated into the fixtures or bulbs. Luckily, there are kits available that include everything you need.

Because LED fixtures provide a spectrum of light perfectly tuned for plants, they end up producing better yields. This is especially true of fixtures with added UV light and IR light, like these top flowering LEDs.

Plants get exactly the light they need, and with programmable and customizable fixtures they get it exactly when they need it, so they reward you with much higher quality fruits and buds.

LED lights do not require as much power. They also don’t require you to dispose of harmful mercury and they don’t need new bulbs to be produced every year.

There is a reason LED technology is often mentioned in the same sentence as alternative sources of power like solar: the are much better for the environment than traditional forms of lighting.

For more benefits, check out this article.

In the past, deciding between LED grow lights and HPS grow lights was difficult, because each had distinct advantages and disadvantages. That is no longer the case. LED now beats HPS in absolutely every area. Of course, this assumes quality LED grow lights, like those from Horticulture Lighting Group.

But if you’re talking about the top LEDs, then there is no longer any contest. They last longer, they give you more power, while using less power, they have a better spectrum, they are more friendly for the environment, they cost far less to operate, they generate less heat and they now barely even cost more. It really has become a no-brainer. Go with LED.