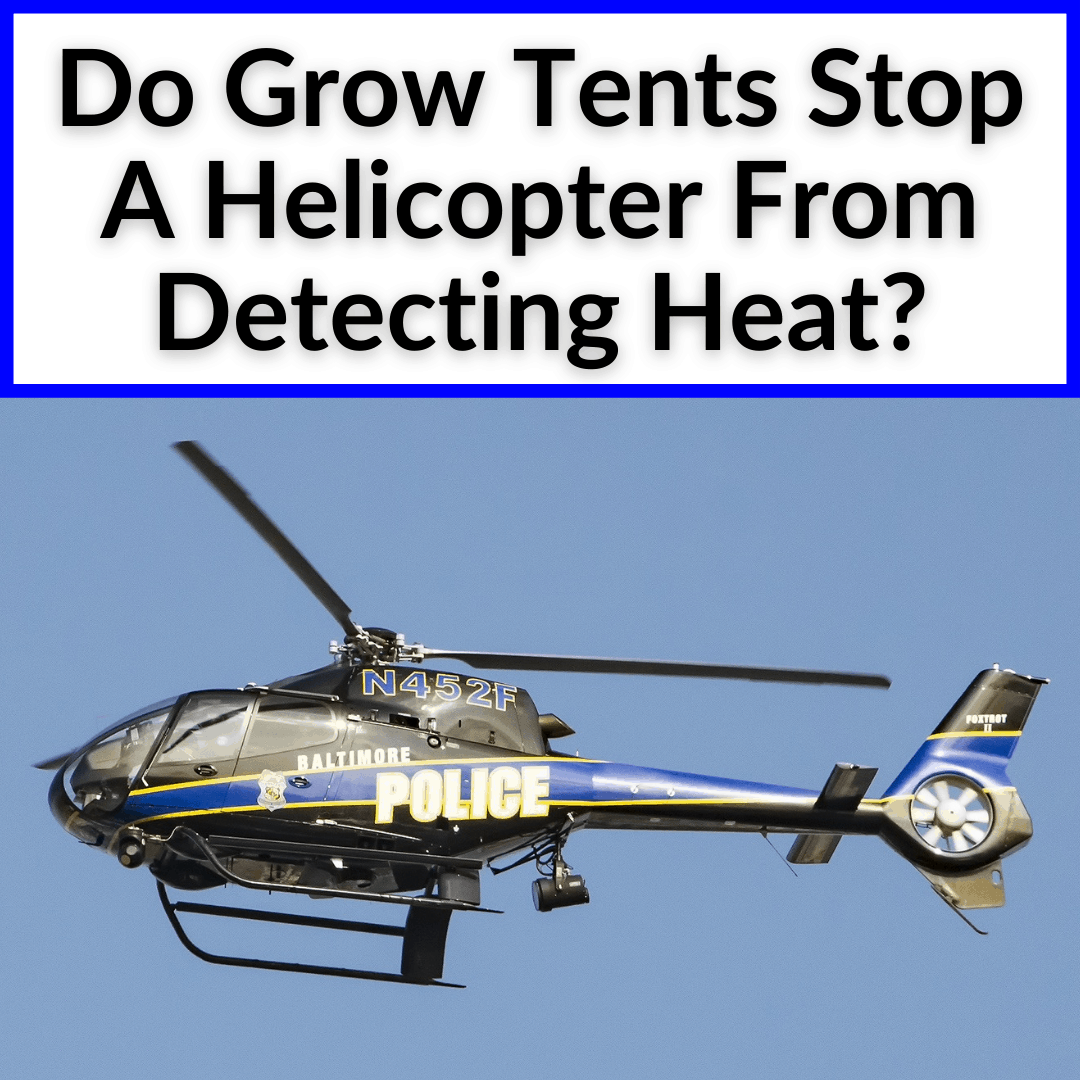 Grow tents can help keep heat contained, but it still has to go somewhere.

In other words, they can keep a helicopter from detecting the exact location of the grow in your home, but not that you are growing in your home.

But it probably doesn’t matter anyway.

The chances of you having to worry about helicopter surveillance of your home are incredibly low.

We’ll cover several reasons why you probably don’t need to worry about this below.

Just in case, we’ll also cover a few things you can do to ensure a helicopter can’t detect your grow, even with thermal imaging cameras.

As mentioned, grow tents can help. A grow tent keeps the heat contained within. Even budget brands like Quictent grow tents do a good job of containing heat.

Most are not insulated, so they do have somewhat of a heat signature. But reflective walls minimize this.

Plus, a helicopter looking for heat signatures uses forward looking infrared technology (FLIR). These cameras do not see through anything. They simply detect heat.

They would not see the heat in your tent. But the heat inside the grow tent can’t stay there. You need to remove it somehow.

And if you vent it into the room or vent it outside your home, a FLIR camera could detect that.

We’ll give you some tips for masking or concealing this heat signature below. But the truth is, you probably don’t have to bother.

It is unlikely you need to worry about a helicopter detecting a heat signature from your grow tent using an infrared camera. Here’s why.

Most people who worry about this issue seem to be home growers with a single 600 watt or 1000 watt light. Often, they are even using LED grow lights.

While grow lights like these produce heat, they don’t create a large enough heat signature to arouse suspicion. Unless you have at least 2000 watts worth of lights (actual watts, if using LED grow lights), you have nothing to worry about. Police departments everywhere are underfunded and that isn’t going to change anytime soon. In fact, it’s only going to get worse.

As a result, they have to be careful about how they spend the limited funds they have. Using helicopter surveillance to catch someone growing marijuana, which is likely to be legal in the near future anyway, is not a good use of funds.

In short: it’s just not going to happen. You really don’t need to worry about this, unless you did something else to get yourself on law enforcement’s radar. And it would have to be something much more serious than simply growing weed.

Police Need A Warrant To Use FLIR

The police can’t simply use forward looking infrared technology to surveil your home. They need to have a warrant to do so.

That means that they already have something else on you, if they are using a helicopter to inspect your home for heat signatures.

If you are careful not to give the police a reason to suspect you, you have nothing to worry about from a helicopter. That means taking all the right precautions.

The very first one is to never tell anyone that you are growing cannabis. In most cases, if the police become aware of your marijuana grow, it is because someone tipped them off.

Keeping quiet and making sure there are no obvious signs from outside the home are the two most important things you can do to keep the police away. Take care of that and you’ll never need to worry about a chopper.

How To Keep A Helicopter From Detecting Grow Room Heat If you are still worried about police helicopters detecting your grow room, perhaps by accident while out on another mission, then here are some measures you can take to minimize the risk.

LED grow lights are just as detectable as any other type of light. But they emit less heat, so there is less heat to detect.

Naturally, if you have a large grow room, this won’t make much of a difference. But for a small grow, switching from HID to LED can bring your heat signature down enough that it no longer arouses suspicion.

Grow In The Basement

If you are not already, grow your marijuana in the basement. Not only is it cooler down there anyway, it is also harder to see a heat signature from a grow room in the basement when you are in the air. You can still detect it just as easily from street level though. If you use a grow tent inside a grow room in the basement, chances are you are keeping the heat well contained. If you’re not sure about the difference between the two, read Grow Tent Vs Grow Room.

Most quality grow tents are lined with reflective Mylar. This material reflects light back onto the plants. But it does not block the heat from IR detection.

For that you need a special lining that can block IR signatures. This one on Amazon is great.

This product is also lined with Mylar, so it will reflect the light as well, just like the regular Mylar lining that is already in your grow tent. If you clicked on that link above, you probably already noticed the one big drawback: it is not cheap.

The exhaust from your grow tent is what is most detectable. There are a few tricks you can try to mask it.

One is to vent the exhaust into the sewer. Find the sewer cleanout access in your basement and run your vents into it.

Some growers run their exhaust underground. The run it through a long pipe that is buried underneath the ground. Not only does this cool the air by the time is pours out of the pipe, it also ensures that the air comes out of the pipe far away from your house. Of course you’ll need some good ventilation fans for this.

Finally, you could use water-cooled lights. The water absorbs much of the heat from the lights and washes it down the drain, leaving only minimal heat to warm the air. The drawback is that these systems are difficult to find, set up, and run.

Build A Room Within A Room

This one is probably a bit extreme for most, but it will be the most effective if you are seriously worried about helicopter detection.

You basically build a second smaller room inside the larger room, with an air gap between the two walls and the two ceilings.

Put another wall between the two made of foam insulation. The air gap and the foam both insulate the grow room. Pump cold air into this gap to make it even more effective and ensure the outside wall stays cold. You’ll still have to find a way to vent the heat out from the grow room, though.

Your average grow tent won’t do all that much to block a helicopter from detecting a heat signature, in large part, because you need to vent that heat out of the tent anyway.

The good news is that you probably won’t have to worry much about helicopters flying around trying to detect grow rooms.

But even if you are worried about this, there are measures you can take to reduce your heat signature and minimize detection.