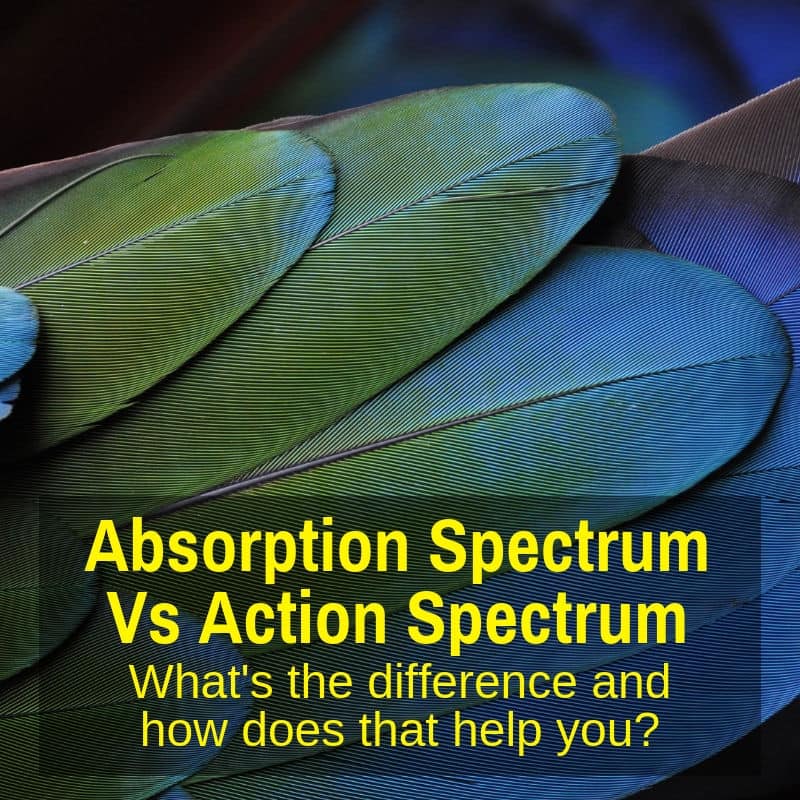 You know why there is so much confusion?

Are there any differences then?

If they were the same, there would be no need for two different concepts.

Differences exist, but let’s be honest.

The differences are not really important for most of us.

Unless you’re an actual scientist, it is not something you need to worry about. If you’re just looking to get the most out of your plant lighting, the important takeaway is this:

Plants need mostly red and blue light, but they also need some light in every other color. Choose your grow lights accordingly. I help you with this at the bottom of this article.

First, let’s look at action and absorption spectra and figure out exactly how they differ.

What Is An Action Spectrum?

The action spectrum refers to the wavelengths of electromagnetic radiation (i.e. light) that are most effective for photosynthesis. In other words, it describes the colors of light that are doing the actual work, meaning they are driving photosynthesis.

In a 1972 paper, KJ McCree found that the action spectra for 22 different plant species were very similar. All showed that photosynthetic active radiation (PAR) was between 400 nm and 700 nm and that all wavelengths within this region were used in photosynthesis.

The wavelengths that drove photosynthesis the most were in the red (600 nm to 700 nm) and blue (400 to 500 nm) regions. The following graph, a variation of which you have probably seen before, shows these peaks in the red and blue areas of the color spectrum.

Contrary to what we are often told (usually be manufacturers of LED grow lights with only red and blue diodes), green light (500 nm to 600 nm) is also used in photosynthesis. The graph above shows some absorbance, but it only takes chlorophyll into account.

Plants also have other photoreceptors that make more use of green light. It still does not contribute nearly as much as red and blue light, but it is important for plant growth and development and should be included in any grow light.

What Is An Absorption Spectrum?

An absorption spectrum is made up of the wavelengths of electromagnetic radiation (i.e.) light that are absorbed by a material they pass through. For our purposes, that material is plant matter and the absorption spectra show how much each color of light is absorbed by various molecules in the plant.

The absorption of green wavelengths is poor, which is why plants appear green to our eyes. When they are hit with the full spectrum of light (i.e. sunlight), the green light is not absorbed, but reflected back to our eyes.

Again, this is why so many LED grow lights contain only red and blue diodes.

But it does not tell the whole story. There are other molecules besides chlorophyll to consider.

As you can see, there is definite absorption in the green and yellow wavelengths with molecules other than chlorophyll. This allows the plant to take advantage of all the non-red and non-blue light it receives and clearly indicates that you want to supply plants with at least some green light, to take advantage of their full photosynthetic capabilities.

What is important to remember is that light absorption and light use are two different things.

The key takeaway is this: plants use red and blue light more than any other for photosynthesis, but they also use every other wavelength to some degree.

The ideal grow light will reflect this. It should provide a large amount of red and blue light, but should also contain light in every other color.

The ideal grow lights to take advantage of the information provided by the action spectrum for photosynthesis are LED grow lights.

LED grow lights contain many LED diodes, which give off one specific color each. This allows manufacturers to tailor the spectrum of their lights however they want. Good ones provide the exact mix of light that the action spectrum describes, and in the exact ratios (learn more about how LED lights work).

This means the lights emit mostly red and blue light, but also have some light in every other wavelength (generally in the form of white diodes), while also including infrared and ultra-violet wavelengths.

Since they have the colors in the exact ratio that plants prefer, no light goes to waste. This is what makes LEDs the most efficient plant lights on the market.

A few of the budget manufacturers give you this spectrum as well. Spider Farmer (see review here) is easily the best among them, since they combine CREE COBs with supplemental diodes, just like the much more expensive Optic LED lights, but do it at half the price.

Ceramic metal halide bulbs are the only other form of lighting that provide plants with all the light they need. The CMH spectrum is not quite as efficient as that of a good LED, because it contains more green and yellow light than plants need. Some of that light goes unused, so you are paying for some light that is being wasted.

That said, CMH bulbs give you a lot of red and blue light, and they have a high output. This makes them great for growing plants, if not quite as good as LED lights. See which CMH lights are best here.

Fluorescent grow lights also give you red and blue light (how much depends on the color temperature) with a lot of green and yellow. Like CMH bulbs, they emit more green and yellow than plants need.

The other big drawback is power. Fluorescent bulbs give you a great spectrum, but they do not have enough power to flower a garden of any considerable size. Learn what types of fluorescent bulbs are best here.

High Pressure Sodium grow lights have been used successfully for many years. But they are far from ideal.

While they have a lot of red light, they emit very little blue light. They also have a ton of yellow and some green light. Much of this is wasted energy.

HPS lights are very powerful and do a great job because of it. But they use a lot of power and generate a lot of heat and much of that is wasted on light that plants don’t actually use.

Plus, the abundance of red light makes them great for flowering, but the absence of blue light makes them much less useful during the vegetative stage. That’s where metal halide bulbs come in.

Metal halide bulbs have long served as the companion to HPS. They provide a lot of blue light, but very little red. As such, they are great when used in conjunction with HPS bulbs. Unfortunately, installing both types of lights is too expensive for most growers.

The compromise has been to use MH bulbs during vegging and HPS bulbs during flowering. But this is also far from ideal. It is much more efficient to use a CMH bulb (see above) during the whole grow cycle. Even better is to use an LED grow light that has a spectrum perfectly tailored for plants.

If you do want to go with HPS and/or MH, this post will help you find the best light for you.