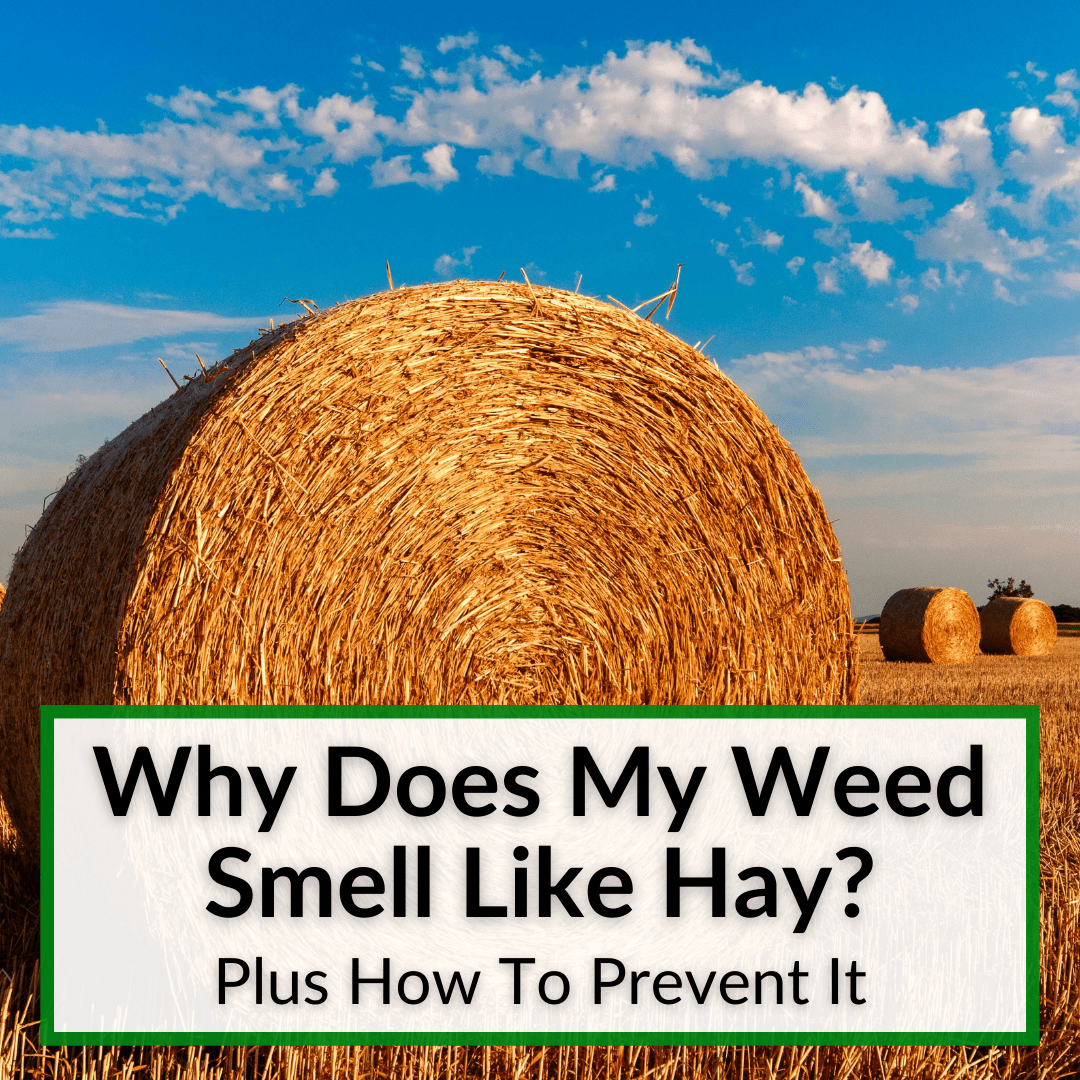 We’ve all been there.

You get ready to smoke some of your freshly harvested and dried (or recently bought) weed and discover that it smells strongly of hay.

And when you smoke it, it is harsh and has an unpleasant flavor.

More importantly, how do you prevent this odor from forming?

Keep reading to learn exactly why marijuana can end up smelling like hay, and what you can do about it. It turns out it’s easy to avoid.

Weed that smells like hay instead of the distinct thick cannabis smell everyone loves results from a large amount of chlorophyll remaining in the buds. This produces a strong hay-like aroma.

Why Does The Hay Smell Happen To Begin With?

Cannabis is a plant, and plants use chlorophyll to survive. If your plants had no chlorophyll they would not be able to grow. It allows your plants to perform photosynthesis, the process of changing sunlight into the energy the plant needs to grow. The hay smell happens when you first harvest your plants and the chlorophyll moves to the tips of the buds from the stems and stalks. It is present in the entire plant. When you harvest your buds they are still moist and some of that moisture is chlorophyll.

How To Avoid The Hay Smell

They key to having weed that does not smell like hay is in the curing and drying process. Plants that are cured and dried too fast are usually the ones that have the hay smell. Curing and drying weed slowly will help avoid it altogether.

As hard as it is to leave your plants hanging and drying when you really want to smoke them, this is the biggest factor in avoiding the smell. Let them dry for as long as you possibly can.

This gives the terpenes more time to level out, and the terpenes are what give the buds the good smell you are trying to go for.

Here are some other tips to help you get the best smelling weed:

Keep A Fan On Low Pointed At Hanging Plants This will move the air around gently and help the moisture escape from the plants. At the same time, the low setting is not too harsh and won’t flash dry the plants while there is still a high level of chlorophyll present.

Dry Plants In A Dark Room

Total blackness is preferred. Any light source (artificial or sunlight) produces a lot of heat, which can speed up the drying process too much. This causes flash drying and preserves the chlorophyll while burning off the terpenes too quickly.

Again, heat is the enemy, because it makes the delicate terpenes dry off too quickly and preserves the chlorophyll before it has enough time to leave the plants.

The ideal temperature to keep a drying room is between 60 and 70 degrees, which is nice and cool. It is about the ideal sleeping temperature for humans, too.

A cool room lets the compounds in the weed leave at their own pace, which is how you get great smelling buds. This is especially hard to do, because it goes against your basic instinct. You want the weed dry so you can smoke it as soon as possible. Why would you want to make it humid and lengthen the drying process?

The answer is the same as before: it is another way to avoid flash drying. The compounds in the cannabis buds need to evaporate and dissipate in their own sweet time.

The more you allow them to do that, the better your buds are going to smell. You spent tons of money on the best grow lights, grow tents, fans and other equipment and waited for months to get to this point. So why rush this vital part of the production process?

Does The Hay Smell Ever Go Away?

Now that you understand the hay smell is simply a sign of a sped up curing process you know that, of course, the chlorophyll will eventually leave.

But the time for the chlorophyll to exit the buds is not supposed to be while it is in a jar waiting to be smoked. It is before the weed ever gets to that point, i.e. during the curing process.

The hay smell will usually disappear within about 3 weeks at the latest. It can be as soon as a week and half.

Can I Make The Hay Smell Go Away Faster? There is nothing you can do to speed up the process. You just have to let nature do its thing. That said, if you are impatient and want to smoke your buds right away, but you don’t want to smoke them smelling like horse food, there are few things you can do to help.

Put Orange Peel In The Mason Jar With Your Hay Weed

Take some fresh orange peel and place it in the jar with your hay, close the lid, and let it sit for a day or two. The weed will take on some of the citrus smell, which will help mask the terrible hay smell.

Put Some Mint Leaves In There

The same concept applies here as with the orange peel. Find some fresh mint and set it beside your buds in a closed container, preferably a glass mason jar with a sealed lid. Get some pine needles and add them to the jar, off to the side of your buds. This will give the weed a nice forest smell.

These are just a few suggestions. They are all things that other smokers have tried and found to work well. Use your creativity here.

Just remember that for this to work, the thing you use to help the smell needs to be moist. Also, for best results, try to keep it from physically touching the buds. You want the moisture to mix with the weed, not the actual item itself.

Yes, you can smoke weed that smells like hay. The only bad side effect is that you will turn into a horse and start neighing and bucking.

Seriously though, there are no side effects. The only unpleasantness is that chlorophyll is a bit harsh on the lungs and may cause you to cough more, but there is no other danger in smoking hay weed.

It will probably not get you as high, and it will taste bad, but if you are desperate and that is all the weed you have, you can smoke it with no issues. But you will probably not enjoy it very much. Unless your name is Mr. Ed.

Now you know that marijuana smelling like hay is perfectly natural, and easily avoidable, you can take measure to avoid it happening again with future harvests.

As for your current batch of hay-weed, you can let it cure some more until the smell dissipates, or you can try adding something fragrant to the container with the weed to mask the hay smell with something more pleasant.