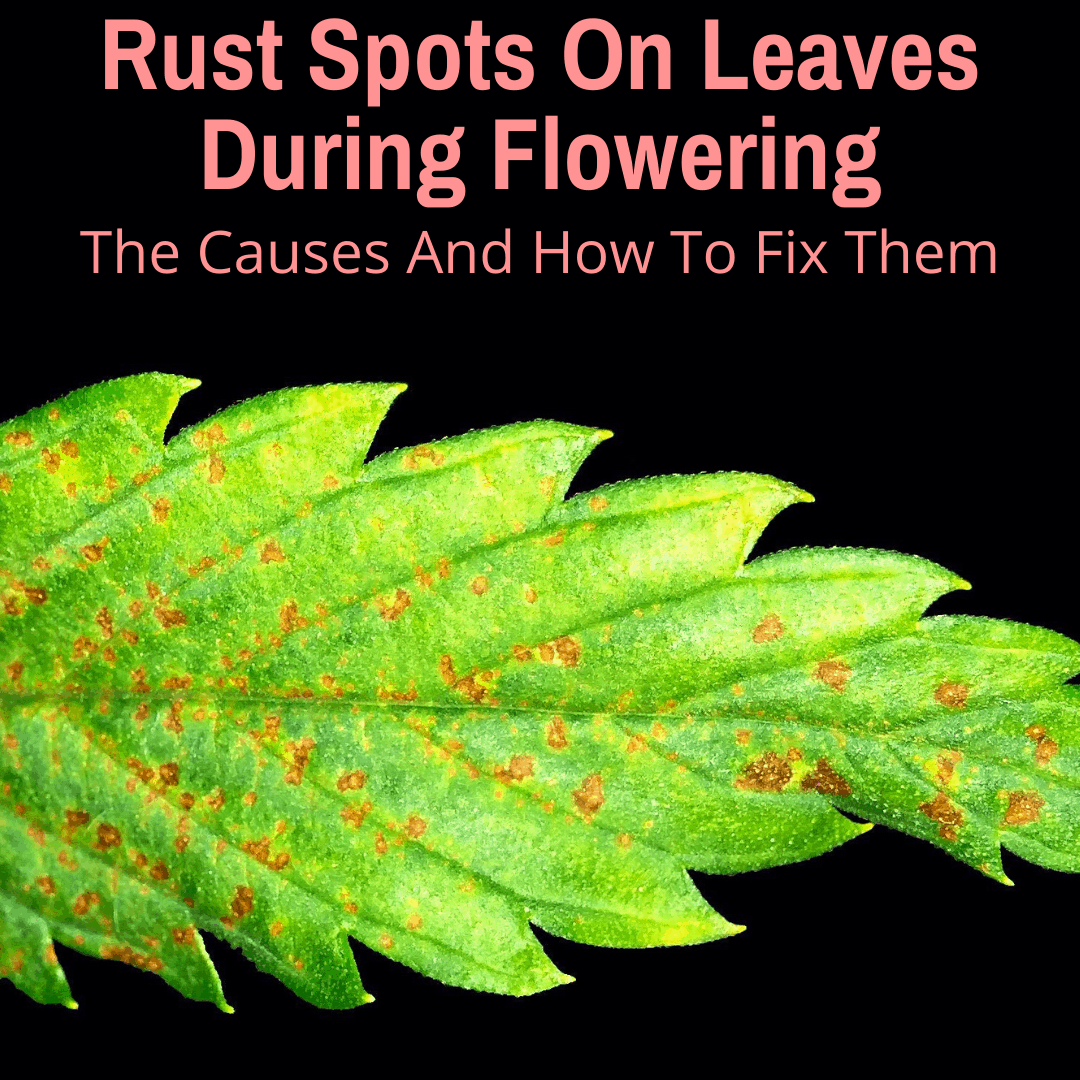 If you’ve been trying to figure out what rust spots on leaves during flowering indicate, you’ve probably come across a number of wildly different explanations.

That’s because these spots can have a few different causes.

But two of them are by far the most common, so we will cover those here.

Generally, rust-colored spots on marijuana leaves indicate a fungal infection or a deficiency in magnesium or calcium. Nutrient burn is also a possible culprit.

Let’s see how you can figure out which issue your plants are having and what you need to do to fix it.

Brown Spots On Leaves During Flowering Of Cannabis

As mentioned, these brown or rust-colored spots on your marijuana leaves are usually the result of a fungus or a calcium or magnesium deficiency, but they can also result from nutrient burn. Let’s begin with the fungus. Rust fungus can affect just about any green and leafy plant. It turns leaves a reddish, brownish or even yellowish color. Its spores rub off at the slightest touch or wisp of air, meaning they spread quickly and easily to new areas of the plant, or to new plants.

But I do know that many cases where a fungus is the cause are misdiagnosed, and growers mistakenly add nutrients to try and solve the problem.

If possible, try to determine what problem you have, before you attempt to solve it. So how can you tell if your plants are being attacked by a rust fungus?

How to Determine If Your Plants Have Rust Fungus

Because this fungus has spores that spread easily, you can usually test for fungus by simply rubbing a finger on the affected spots. If some of the rust rubs off onto your fingers, then it is rust mold. If it does not rub off, it is most likely an problem with nutrients (see below).

This fungus loves temperatures from 60° to 80° F with high humidity. In other words, it likes the growing conditions of marijuana. And it usually takes hold during the flowering stage, because that is when your plants are focusing their energy on reproduction and are thus at their most vulnerable.

If rust thrives in the same environmental conditions as cannabis, what can you do to prevent it?

How to Prevent Rust Fungus

The most important factor for preventing the growth of fungus is ventilation. Fungi love humid conditions where moisture is always present.

If you ventilate your grow room well, and also lower the temperatures somewhat at night, you can ensure that any dew that is present dries out, hindering the growth of fungus. Not only should your marijuana growing room be well ventilated, but you should also make sure that the air can circulate easily among the plants.

Lollipopping cannabis plants can help keep humidity down and prevent fungal growth. This is a practice whereby you trim off the lower branches prior to flowering.

It is also important to not crowd too many plants together and you might even want to remove some leaves so that air can flow better past the plants. Make sure you get the right sized grow tent for the number of plants you have.

You should also always water during the daytime, so that the water has a chance to evaporate. Finally, make sure no leaves are touching the soil. Remove any leaves that come close.

But what can you do if it is too late? How do you get rid of rust fungus after it has taken hold?

How To Get Rid Of Rust Fungus

The first thing you should do is remove any infected leaves. And do not simply throw them in a trash can in the grow room. Remove them entirely and get them far away. Ideally, burn them.

Once you have done that, you want to treat your plants with some kind of fungicide. We caution against using chemical sprays and recommend using natural remedies instead, for obvious reasons.

One of the best natural remedies is sulfur. Use a sulfur spray to spray the plants every 10 days or so. Other natural sprays to try are a baking soda mix with 1 teaspoon to a quart of water or a garlic spray with a half cup of minced garlic in a quart of water (let it sit for at least 24 hours before using).

It is a good idea to mix up the type of fungicide you use, so that the fungus does not develop an immunity to any one kind.

What if none of this works to fix the problem? What if new leaves continue to exhibit these rust-colored spots? If this is the case, you may not have a fungus on your hands at all. It may be a nutrient deficiency or nutrient burn.

Magnesium Or Calcium Deficiency (Or Lock Out) Rusty brown spots can also be a sign of a magnesium or calcium deficiency, though they more commonly result from a lack of magnesium than calcium.

Generally, a minor cal mag deficiency will not negatively affect the flowering of your weed plants, but when they are flowering, the symptoms of a deficiency will get worse (since the plant uses up more of these nutrients when flowering).

However, if you do not rectify the issue, the deficiency will worsen. What starts out as a few rust spots on the middle-aged leaves (those just below the top of the plant), ends up spreading to all leaves. At this point, flower production is reduced.

Of course, if you rectify the deficiency, but it turns out that wasn’t the issue at all, you will make the problem worse. This can happen when calcium and magnesium are locked out. We’ll get into that below.

First, we want to make sure the rust spots are actually due to the plant not getting enough magnesium or calcium (whether it is because you are not feeding it enough or because those nutrients are locked out). To determine that, look for other symptoms that commonly (but not always) appear as a result of a deficiency of Mg or Ca.

Additional Symptoms Of A Mg or Ca Deficiency

With a calcium deficiency, you will likely also notice the lower leaves starting to curl. In the case of insufficient magnesium, the leaves begin to turn yellow, while the veins remain green.

If you see either of these symptoms, cannabis leaves curling up or turning yellow, you know that your plants are not getting enough of one of these minerals. Thus, the issue is not a fungus.

But this does not necessarily mean you should give your plants more calcium or magnesium. They may be getting plenty, or even too much, but they are simply unable to absorb them.

Nutrient lockout is when the uptake of a nutrient is inhibited for whatever reason. There can be a number of causes for this, but the most common is the pH level.

Different nutrients have different pH ranges at which they are absorbed best. If the pH goes outside that range, that nutrient can no longer be absorbed. It is locked out.

For marijuana plants, you want to keep the soil pH at 6.8 (5.8 for hydro and other soil-less media). That is within the absorption range for every essential nutrient, meaning none of them are locked out.

Other possible causes for nutrient lockout can be a very wet and/or cold root environment, or a high ratio of potassium, ammonia or calcium to magnesium, or vice versa for calcium.

Magnesium or calcium lockout is probably the most common reason for a deficiency in either of those nutrients, so you want to make sure this is not the issue in your case, before increasing the nutrient amounts. The next section covers that.

How to Fix A Ca or Mg Deficiency

The first thing you need to do is rule out a nutrient lockout. To do this, test the soil pH, by testing the water runoff after it has seeped through the pot.

A digital pH meter like this one is best, but you can also use testing papers, if the meter is out of your budget. Just don’t use soil testers, since they are generally not very accurate.

Adjust the pH to fix the problem. As mentioned, the best water for cannabis plants has a pH of 6.8 in soil and 5.8 for soil-less media.

If your pH is fine, then it is likely that you are not giving your plant enough calcium or magnesium. Increase the amount of the lacking nutrient and monitor the plant to see the effects. Remember that too much of one of these two nutrients can result in the other being locked out.

If the issue is not the result of a fungus or a nutrient deficiency, it could be the result of nutrient burn. This simply means your plants are getting too many nutrients.

To fix this issue, you want to first do a flush. This means giving you weed plants plain water to flush the remaining nutrients out of the soil. Once there are no nutrients left, you will notice your plants starting to droop.

Ideally, you want to stop flushing before this happens and start adding nutrients back in. Give your plants half of the amount they were getting before and monitor the effects. Increase or decrease the amount as needed. Learn how to flush weed plants here.

Rust spots on leaves during flowering can be the result of a few different issues. The first step is to figure out which issue your plants have. When you know that, you can go about fixing it.

If it is a nutrient issue, there is unfortunately no exact answer for how much or how little of each nutrient your plants need. It depends on too many different factors, that you really just need to keep experimenting with the amounts until you get it just right, where the plants are no longer showing rust spots or other signs nutrient burn or a nutrient deficiency.

The good news is that cannabis is a resilient plant, so even if you do a lot of things wrong, it will still grow and produce. It just won’t produce as much as a perfectly healthy plant would, which is why it pays to keep working at it.