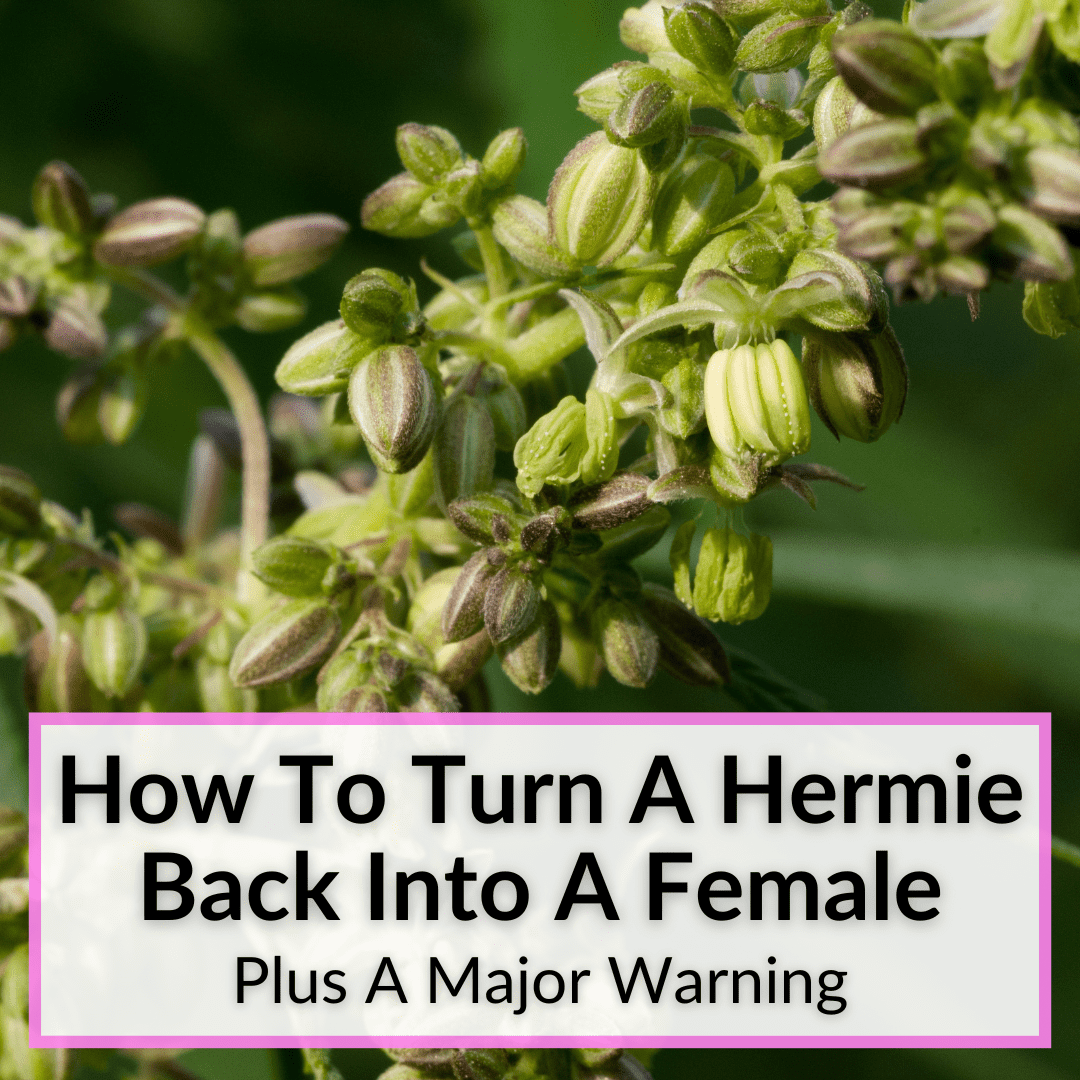 So, you’re in your grow room.

You’re gazing upon the gloriousness of your flowering beauties, salivating at the thought of all the fat buds you will soon harvest.

Suddenly, you notice something strange.

Along with the normal white pistils at the flowering sites, you see some small ball-like growths.

What is going on?

Hermies, my friend. That’s what’s happening. And it’s not good.

Hermies can ruin your entire crop.

That’s why you want to get rid of them as quickly as possible. Ideally, by turning them back into females.

Keep reading to learn how to turn a hermie back into a female and whether the process is a good idea in the first place.

How To Turn A Hermie Back Into A Female

Hermie is short for hermaphrodite, with hermaphrodites being cannabis plants that have both male and female reproductive organs. Essentially, hermies are plants that can self-pollinate, or pollinate the rest of your healthy crop.

And they will definitely do just that, if left long enough. There are two common types of hermaphroditic cannabis mutations. We already have this blog post explaining the true intricacies of hermaphrodite weed plants. But what we do not have just yet is a post discussing how you can go about turning the hermie back into a female.

Or if that is even possible? It is, but it is not a good idea. Which brings us to our warning.

Before we go any further, let us just say: we do not recommend these options. If you find a hermie in your crop, we strongly recommend you just get rid of the plant immediately, before it pollinates the rest of your crop.

Dutch Master Reverse was once lauded by the community for its amazing stopping power and its almost magical ability to not only reverse hermies, but to also stop them from being produced in the first place.

It was up there with highest selling non-nutrient products in hydroponic supplier stores worldwide. Did you notice all of the past tense verbs?

That’s because the stuff is banned. For good reason.

Look, you can still find this product pretty easily online, and even in some brick-and-mortar stores. But for the most part, hydro suppliers have stopped stocking Dutch Master Reverse.

Dutch Master is also no longer producing it, along with a range of other products.

Dutch Master was one of the first companies to pioneer the use of PGR (plant growth regulators) in cannabis cultivation settings. And while the amazing results of these totally unnatural additives speak for themselves, they come with a range of unwanted issues. Not only are they seen as a pretty dangerous carcinogenic (cancer-causing), but they can also poison the liver, cause infertility in both men and women, and are classified as environmental pollutants. Nasty stuff.

Safe to say that you should probably steer well clear of these products. But, if you have some laying around, and are hell-bent on using the horrible stuff – how do you go about it?

Again, we implore you not to use these chemicals on any plant that is intended for human consumption. But if you are 100% sure that you want to go down the Dutch Master Reverse route, then it’s a pretty simple application process.

All you have to do is completely cover the plant with the spray on the first day of flower, and then again on the 10th day. You want to make sure the plant is absolutely saturated, and that the undersides of the leaves are also covered.

If you are using it as a preventative, you want to give the plants a good spray once 3 weeks before you switch the lights to 12/12 for flower, and again in the final week before flowering the crop.

But yeah, don’t use it. It’s bad stuff and is banned for a reason. Ok, this one only works with true hermies (and even then, not really). Nanners release pollen as soon as they appear, so it’s no use trying to pluck them.

If you find a Nanner plant in your crop, the only way you can keep her going is by fully quarantining her from the rest of the crop.

But with true hermies, you have a little more time. It takes a few weeks for the pollen sacs to get to the point where they are ready to open up and spew out that pollen.

This means that if you identify them early enough, you can carefully pluck them off. Keep in mind that it doesn’t take much for them to open up and release the pollen.

You can decrease the chances of this happening a bit by wetting the sac down during the removal process. Wet pollen is pollen that cannot travel. This greatly reduces any chance of pollination happening while you pluck the sacs, but it doesnt 100 percent stop it.

Which Route Should You Take?

That’s a really hard question to answer. I mean, definitely avoid the Dutch Master Reverse spray, but should you bin the plant or try and pluck? That just depends on your situation.

I have had plants turn hermie that only produced a few seeds, with the rest of the plant being totally unaffected. And then again, I have heard stories of one single hermie pollinating an entire crop.

So, what to do? Your best bet is to just get rid of the plant, unless you don’t mind running the risk of seeds through all of your bud.

Turning a hermie back into a female is obviously the best way to deal with hermaphrodite weed plants. In theory. But in practice, the methods for doing are either too unreliable or too dangerous.

As a result, we strongly recommend eliminating hermies as soon as you spot them. Cut your losses on that plant and act quickly to save the rest of your harvest. And always try to keep from stressing your plants as much as possible, to reduce the chances of hermies appearing int he first place.