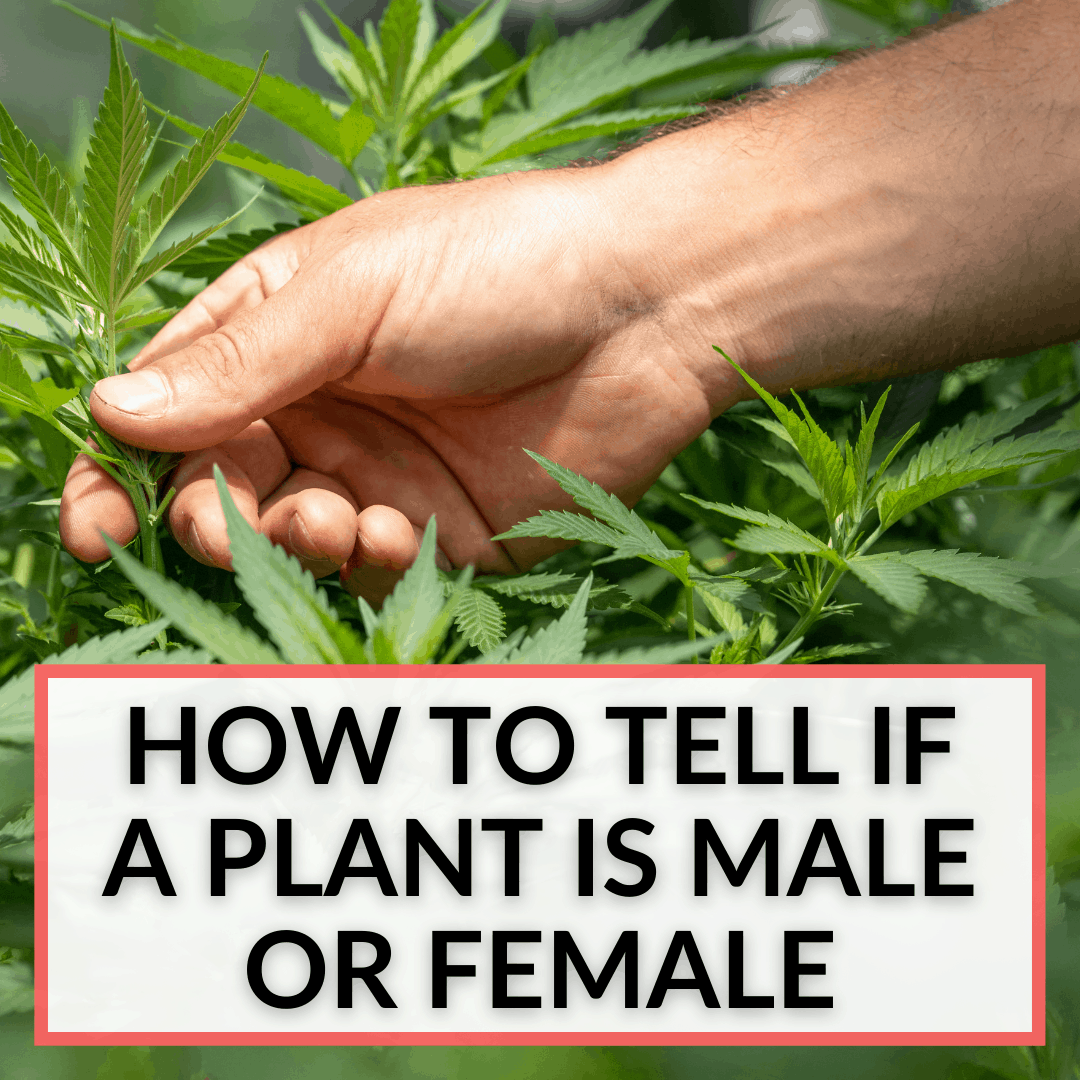 When it comes to cannabis, males ruin everything.

That’s why it is vital to learn how to tell if a plant is male or female as early in the grow cycle as possible, so you can remove any males immediately.

But how do you do that? Plants don’t exactly have obvious sexual organs.

And using those is the most common way to sex a marijuana plant. But you have to wait until the organs actually appear. Luckily, there are faster alternatives. We’ll cover them all below.

How To Tell If A Plant Is Male Or Female

You can tell the sex of a cannabis plant a few different ways. The way you sex them at the earliest stage of growth is by using leaf testing. This a chemical test that can be done on seedlings as young as 2 weeks old.

These are tests that are commercially available, and if you have the budget, they may be a good option for you. Early leaf testing is not the only way to sex cannabis plants, however. The early stage chemical leaf test is a great option for many growers who need to know the sex of their plants right away. It is a convenient and extremely accurate method of testing.

How The Tests Work

They use a small sample of the plant’s leaf and subject the sample to some seriously nerdy science stuff which I will attempt to explain here.

The official name of the test is a qPCR test which is short for polymerase chain reaction test. That is a lot of fancy words to be sure, but what you really need to know is that the test is accurate, and you will know for sure the sex of your plants long before the veg stage.

In addition to the sexing test, there is also another important test that can be done at this stage that you may not be aware of (I was not).

These potency tests are also extremely accurate and can tell you the potency of your harvest long before the plant even gets to veg.

If you have some extra money laying around and you are getting ready to start a grow, you may want to seriously consider investing in one, or both early stage seedling tests. Let’s go science!! This is the way most people find out the sex of their plants. The early stage tests are awesome, but they are not exactly cheap.

Of course, since the demand for these tests is increasing, manufacturers are making more of them, so the cost is going to go down over time.

In the veg stage, your plants begin to beef up and start shooting out leaves all over the place. But leaves are not the only thing growing at this stage.

Small growths called pre-flowers start to appear near the base of the leaf stems. They are not easy to see with the naked eye but if you have a microscope, a magnifying glass or some strong readers, you can look at them and figure out the sex of your plant. Male pre-flowers are shaped like a pointy gardening tool commonly called a spade, with a pointy tip and rounded base. They also tend to have white pistils pointing out. These are immature pollen sacs.

As the veg stage goes on you will see clusters of them showing up. That is when it is the easiest to tell your plant is male.

The small spade shaped growths can appear as early as week 3, but are always there by week six for sure. The earlier in the veg stage you find them, the smaller they will be and the harder to identify.

The telltale sign your pre flowers belong to a female plant is the little white hairs they usually have sticking out of the top. There are usually two of them, but that is not always the case.

The shape is also easy to identify. Female pre flowers are thinner, less spade shaped, and can sometimes be larger at the bottom. Just like with males, the longer you wait to identify them, the more developed they are and the easier it gets.

If you want more information on this, we have another article covering how to tell if your plant is male or female before flowering.

How To Get More Female Plants Just like in the human species, female cannabis plants are way more popular. This is just a fact of life and men of all species have learned to live with the fact that nobody really likes them.

The sex a plant becomes is something that is not fully understood. There is no definitive science that explains why a plant becomes one sex or the other. However, there are things you can do to help your plants become female.

The most direct and easiest way is to get some seeds that are already guaranteed to produce female plants. These seeds are called feminized seeds.

You can find them in any good seed bank. Here is the selection of feminized seeds on ILGM, our favorite online seed bank. Feminized Marijuana Seeds From ILGM
$89 - $109
Shop Now
We earn a commission if you make a purchase, at no additional cost to you.

Be An Obsessive Grower Less than optimal conditions in the grow tent tend to produce more male plants. Or female plants that produce seeds without males, i.e. hermaphrodites. This is something that has been observed for years and is accepted knowledge.

Things such as too much stress on the plants, inconsistent lighting schedules, too much heat, and the incorrect mixture of nutrients or soil PH can all help trigger your plants to lean toward becoming males.

Since we know that to be true, we can do the opposite to help produce more female plants.

If you can keep the light schedule to mimic shorter days, keep the humidity up, keep the temperature a bit lower than usual, keep on top of your nutrient mixture, watch out for over watering, and overall do everything you can to keep your plants happy, you will have a much better chance of producing more female plants.

And if you make a mistake, you can usually recover. Even if your plants are noticeably suffering from too much heat, for example, you can still help your cannabis plants recover from heat stress.

A simpler way to get more females is to use seeds from your healthiest, happiest plant. The healthier a mature plant is, the more likely the seeds it produces will produce female plants.

Most home growers wait until the pre-flowers appear before they determine the sex of their plants. This is early enough to remove any males and no special equipment is needed.

If you want to know the sex of your cannabis plant much sooner, you’ll have to pay for an early stage chemical leaf test. This will give you the answer in the seedling stage.