Quantum board LED grow lights have completely changed the market. They are highly efficient, have a great spectrum and they cost less than many other lights. But the top quantum board lights from HLG still cost more than many beginning growers can afford. That's where the Chinese knock-offs come into play. The best of them like Spider Farmer, cost quite a bit less. … END_OF_DOCUMENT_TOKEN_TO_BE_REPLACED

It's a good time to be a grower. More and more companies are releasing quantum board style lights and the Maxsisun PB series of LED grow lights is one of the more intriguing options. HLG started the quantum board craze and their lights still sit on top of the market (review here), but they are also the most expensive. Among the Chinese brands selling basically the same … END_OF_DOCUMENT_TOKEN_TO_BE_REPLACED 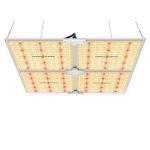 Quantum boards are all the rage. It started with HLG, but now several budget brands have started offering quantum boards with Samsung chips and Meanwell drivers. One of the best is Spider Farmer and their SF line of lights. They basically give you what HLG gives you, but at a fraction of the cost. Of course, they are a Chinese brand (HLG are an American brand, but … END_OF_DOCUMENT_TOKEN_TO_BE_REPLACED

Everyone has heard of quantum boards by now. You can't visit any forum on growing without seeing HLG LED grow lights mentioned, and usually in glowing terms. But how much of the hype is real? And how much is just good marketing? Here's the truth: the reason you keep hearing and reading about them is mostly down to marketing. When they first came out, HLG made sure … END_OF_DOCUMENT_TOKEN_TO_BE_REPLACED

Mars Hydro finally jumped on the quantum board bandwagon and released several full-spectrum white LED grow lights. In fact, they released two lines of lights: the SP series and the TS series. They are very similar, but they do have a few key differences, which I'll cover below. The important thing is that both use mostly full-spectrum white LED diodes, with a mix of cool … END_OF_DOCUMENT_TOKEN_TO_BE_REPLACED