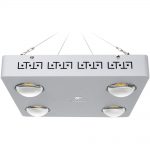 Numerous fixtures use the CXB3590 COBs from CREE. For this review I will focus on CF Grow (AKA Canagrow), because they do it best. What exactly do I mean by "best"? I mean they give you the best value for your money. There are higher quality fixtures with these COB chips, but the cost far more. The Canagrow CXB3590 fixtures give you the same LED chips at a much … END_OF_DOCUMENT_TOKEN_TO_BE_REPLACED

Most COB grow lights are worthless. Not the Aglex Cob LED grow lights. All four lights in the Aglex COB Reflector Series (the 600W, the 1200W, the 2000W and the 3000W) are impressive. They ranked only a tenth of a point behind the Phlizon COB in our ranking of top COB plant lights. But the Aglex lights cost quite a bit less. That will likely make them the top choice … END_OF_DOCUMENT_TOKEN_TO_BE_REPLACED 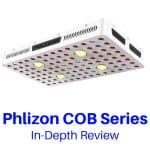 There's a reason I'm reviewing the Phlizon COB lights and not the Phlizon Newest LED grow lights. And it's simple: this light is far better. Yes, it costs more, but it gives you double the output and a far better spectrum for plants. So why does every other site review the Phlizon Newest lights only (and rave about them)? It's because those lights have far more … END_OF_DOCUMENT_TOKEN_TO_BE_REPLACED