You are here: Home / Buying Guides 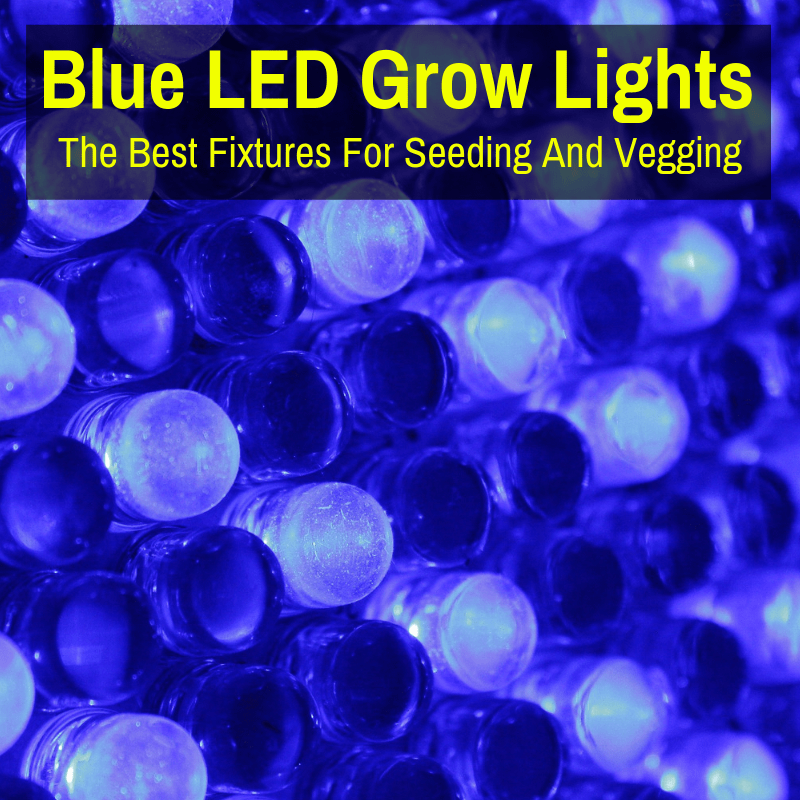 Let’s clear up a big misconception right away.

Blue LED grow lights are not the best choice for vegging.

Plants in the vegetative stage love blue light, that is true. But they don’t want only blue light.

In other words: a full-spectrum light.

So what are blue lights good for then?

Well, they do work for vegging. They’re just not ideal. The same goes for seeding.

Apart from the first light listed below, which includes some white diodes and thus has light in every color, blue LED panels and bulbs are best used as supplemental lighting.

That is their strength.

If you have a primary light that is mostly red, these blue fixtures are a great way to increase the blue light hitting your plants.

Red-heavy fixtures are often used for flowering. By providing some additional blue light during the vegging stage, you can give your plants better light for that stage, without having to get a whole new lighting fixture.

These blue LED fixtures are all extremely inexpensive, making them a nice, cheap way to boost plant growth.

But you do have to make sure you get a good one. Many of the options out there are completely useless.

That’s why I’ve narrowed them down to the best few. I also included a more expensive full-spectrum light below, in case you are not looking for supplemental lighting, but a fixture that can veg on its own.

Let’s take a closer look at the lights.

Before we get to the individual reviews, I wanted to briefly explain what blue light does for plants. This post has a more in-depth explanation of the effect of different colors of light on plants.

Blue photons drive the photosynthetic reaction and blue light regulates the opening of stomata. Those are minuscule openings on the leaves that control water loss and carbon dioxide intake.

The most important function for our purposes is that blue light suppresses extension growth. This results in shorter plants with thicker, bushier leaf growth. Without blue light, plants will stretch and grow spindly and weak.

These are the top 5 blue spectrum LED grow lights currently available. I’ll begin with the best vegging light period (though it uses blue-heavy white light, not blue light), and then follow with the best blue bulbs and panels.

This light has some blue LEDs for a vegging boost, but is mostly made up of full-spectrum white LEDs.

So why is it my favorite light for vegging and for seedlings?

Because white light is far better for plants than only blue light. White light contains all colors of the spectrum, just like sunlight. And that is what plants really want.

The HLG 300L V2 Bspec uses high quality Samsung LM301H diodes with a color temperature of 3500K. That is a warmish white light that will actually work for any stage of growth, but it contains a good amount of blue light, making it especially good for vegging.

The fixture also has 470 nm blue diodes to supplement the white light and really provide a vegging boost.

The one thing HLG lights are famous for is their efficiency. They give you a far greater output for the wattage input than other LED lights. This is largely due to the Samsung chips and Meanwell drivers, both of which are the industry standard.

The driver is also dimmable, from 90 to 270 watts. This means you can dial down the power when you don’t need the light to be as strong, which saves you money. If you are using it for seedlings, for example, you probably won’t need it on full power.

HLG lights give you are large, even coverage area due to the way they are configured, with many smaller diodes spread out over a large panel. This also means they can be cooled passively, so there is no need for a noisy fan to dissipate heat.

Horticulture Lighting Group provides a 3 year warranty on their lights and they are very good at follow up service, if you have any issues. Customer service is the area where they have made a ton of improvements over the past year and now rank among the top brands in that department.

We have a full review of HLG lights here.

The 24 watt blue blue from ABI is the best blue LED grow light bulb on the market. It rates above the other good choice further down this page, because it is more powerful, though it may not seem like it at first glance. And also for honesty and quality.

This bulb is 24 watts and that one is 36 watts, so how is this one more powerful?

Because 24 watts is the actual power draw, while the other bulb below has an actual draw of 20 watts. In general, the 2 bulbs are very close, but I gave this one the edge in power and in being honest about that power.

Instead of calling their bulb a “45 watt” light, like most Chinese brands would, they call it a 24 watt light, because that is the actual power consumption. That kind of honesty should be rewarded, especially in an industry where it is exceedingly rare.

But honesty isn’t the only thing ABI has going for them. They also make a great little bulb.

It screws right into any standard light socket (E26), so you can use it in an existing lamp fixture you may already own. The diodes emit a blue light with a wavelength from 450 to 460 nm.

The ABI bulb is assembled in the USA from quality components. It is rated for 50,000+ hours of use and comes with a 3-year manufacturer’s warranty.

The Ultrathin 225 LED Panel from Yescom is the thinnest grow light I’ve ever seen, apart from the best led grow light strips. That makes it a great choice for supplemental light. I would not use it as a standalone fixture, though.

The main reason for that is the limited spectrum. As the only light source, you’d want some light in every color, not just blue. Even for seeding. For that reason, I recommend the first fixture listed above if you are looking for a standalone seeding light.

But if you’re looking to supplement an existing light with some additional blue light, this fixture will do just that. And its small size gives it some more flexibility than the first fixture on this list.

This light only draws 22 watts, but has a lumen output of 2475. That gives it more output than the first fixture, but this light has no lenses, so the light is not as focused and won’t penetrate as deeply into the canopy. That said, canopy penetration is not a strong point of any of these lights, nor is it something you’d expect in a supplemental light.

The 225 diodes on this panel emit a blue light with a wavelength of 450 nm. The panel has a rated lifespan of 50,000 hours. Yescom does not provide a warranty. The same fixture is also available with white diodes, instead of blue. Using the two in combination could be a great idea, depending on the kind of light your plants are already getting.

The ABI bulb reviewed above is my favorite, but this 36 watt blue bulb from HiGrow is a close second. My main issue with this bulb is the fact that it only draws 22 watts of power, not 36 as stated, and it is lower quality.

Obviously I know that every Chinese brand (and many US brands) follows this naming convention that is best referred to as “lying”, but ABI does not. I like that.

Either way, the ABI bulb is more powerful than this one, though they do not provide any actual output data, unfortunately.

HiGrow does provide some data, which states that their blue bulb gives you 1046 lumen of light. It uses 18 all-blue 2w Bridgelux/Epileds diodes with a wavelength of 450 to 460 nm. 90° lenses focus the light downward into a more intense beam.

Like the ABI bulb, this one also screws into any standard E26/E27 light socket. Unlike that bulb, this one does not have a fan, but uses 0603 aluminum heat sinks. They work well, but without the fan, this bulb can’t quite generate the same type of power as a fan would allow.

This bulb is made from lower quality components than the ABI bulb (plus it’s assembled in China), so you can expect a bit of a higher failure rate (i.e. your chances of getting a bad bulb are slightly higher), which is another big reason I prefer the ABI bulb. That said, HiGrow give do you a 1 year warranty and a 30 day money back guarantee.

The Miracle LED Grow Lite Growth Starter bulb is a bit different from the other lights on this list. It looks exactly like a standard incandescent lightbulb.

Naturally, it screws into any standard socket (just like the two LED bulbs above). Where it differs is the price. Those bulbs are cheap. This one costs even less.

Miracle LED claim this bulb can replace a 100 w bulb while only consuming 9 watts. I’m not sure what they mean by 100w, but I’m guessing it must be a 100w incandescent bulb and not fluorescent.

As you can probably imagine, a light that only uses 9 watts is not super powerful. That said, the Amazon listing says it emits 1900 umol.

Honestly, that is ridiculous. They don’t say what height that was measured at, but no matter how close you get to this bulb, no good PAR meter is going to read 1900. That figure is nowhere to be found on the Miracle’s own site, so I have no idea where the Amazon seller pulled that from.

Bottom line: this bulb is fairly dim and easily the least powerful on this list.

Due to the lower output, I doubt this light would be very effective as a seed starter, despite the claims. It could work for a couple of seeds in the same pot directly below the light, but not for a substantial amount of seeds. For that, the first light on this list is much better suited. And it really doesn’t cost too much more.

That light also has a better spectrum, thanks to the white diodes. This Miracle LED light emits only one wavelength: 475 nm, which is blue.

Miracle LED provide a one year warranty. Since the bulb is so cheap, you could get a bunch of them (ideally some blue, some white, some red) and use them in combination. Added up, they could be effective, similar to how you’d use a number of CFL bulbs to grow a single plant.