I’m sure you’ve heard of the Fluence Spyder and Gavita 1700e grow lights.

Both are crazy popular. They’re also crazy expensive. And crazy unavailable, with lead times of many weeks, even months. 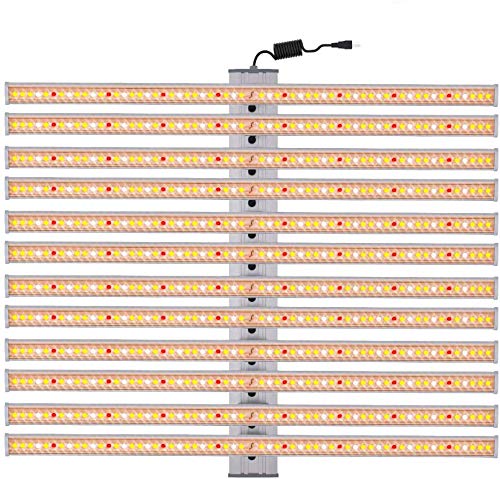 It is very similar to those two lights, giving you most of the advantages, without the two biggest disadvantages: it costs far less and is not constantly on backorder.

Let’s take a closer look at this monster in our full Aceple AG-6000 review, to find out if it is a worthy substitute for two of the most popular LED grow lights on the market.

Spyder style lights have become hugely popular, due to their incredible efficiency and the best light spread of any grow lights on the market. It was only a matter of time before Chinese brands began copying the design.

Aceple’s AG-6000 is one of the most popular copies, and for good reason. It gives you the same great efficiency, light distribution, heat dissipation and spectrum. But it costs far less.

Let’s begin this review by taking a look at the key features. Then we will dive into the major advantages of this light and follow that with a look at its disadvantages.

Let’s take a brief look at the major advantages of the AG-6000, before getting into a bit more detail on each one.

Quantum board LEDs were the first to do it. They spread out a bunch of weaker diodes over a large panel, which differed from previous LED grow lights that generally used a much smaller fixture with fewer, more powerful diodes.

Having a larger fixture obviously made for a more even light distribution across the canopy. It solved one of the bigger problems with grow lights.

Instead of incredible intensity directly beneath the fixture and weak light toward the outside of the coverage area, quantum lights gave you less intensity in the middle and more around the outside, evening things up a bit. And they did it without the need for lenses that weaken the output.

Then came the Spyder style design, with multiple bars combining to form a humongous fixture that stretches almost across the entire coverage area. Naturally, this evened out the light distribution even more. Take a look at the PPFD footprint of the AG-6000. 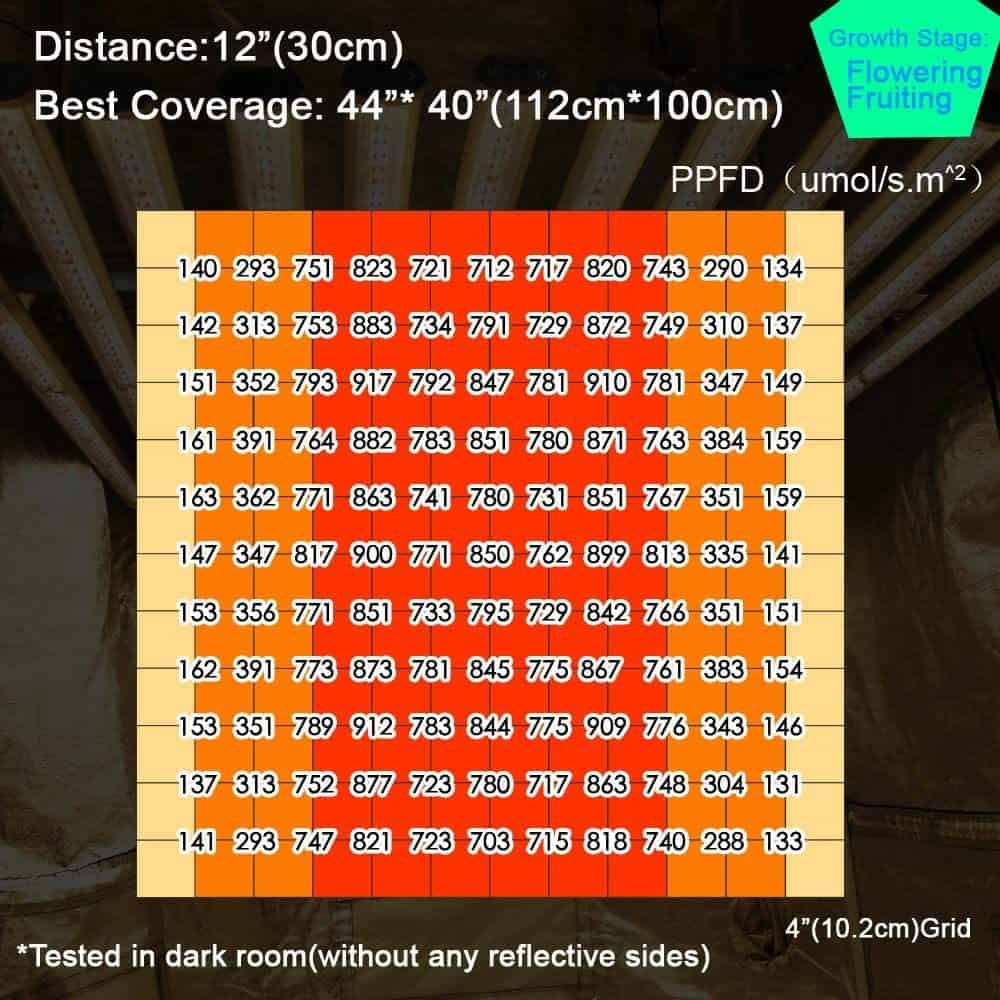 You can see that the PPFD values are much more evenly distributed than those for traditional LED grow lights. However, they are not quite as good as those of similar lights. But since this one costs much less, it is a tradeoff that will be worth it for most. We’ll give you another similar light below that gives you a higher output, while also selling for less than the top lights (but still more than this one).

With an output of 1650 umol/s and an input of 660w, this light achieves 2.5 umol/J, which makes it incredibly efficient. As mentioned, it lags slightly behind the top lights, but at less than a third of the cost, that is not going to be a big issue for many people.

The spectrum is another big strength of this light, and all similar lights. Instead of the old “blurple” spectrum, they combine red supplemental diodes with all white light. This works much better for plants and the industry as a whole is moving in this direction as a result.

As you can see, it has peaks in the red and blue and yellow/orange wavelengths, with good amounts of light in every other wavelength as well. This is a great spectrum for any stage of growth and it is especially effective for blooming. It is far better than an all red or blue LED grow light.

Another big advantage of this type of design is a great heat distribution. Since the individual bars are separated by blank space, air can easily flow between them and aid in cooling. What’s more, the small diodes don’t generate as much heat to begin with as the larger diodes on standard LED grow lights.

All of this adds up to a more efficient light and a longer lifespan for the diodes. It also means you won’t have to work as hard and spend as much money on cooling your grow room. On the other hand, you may have to heat it in the winter, since your grow lights won’t be providing nearly as much heat anymore.

This is not necessarily a disadvantage. Sure, it is nice to have Samsung LED chips and MeanWell drivers, but name brand components like that obviously drive up the costs. Plenty of fixtures already offer that, so it is nice to have an alternative that sells for much less. But if you want the name-brands, this is not the fixture for you.

This is a direct result of using no-name parts. They are not quite as good as the high-quality ones top brands use, which results in less power. That said, the difference is not huge, but the difference in cost is gigantic.

This, to me, is the one major con when buying from Aceple, or most any other Chines brand. They simply do not put forth any effort toward quality control, which means your chances of getting a faulty product are higher.

And if you do receive a light that does not work correctly, it will be much more hassle to get it replaced. Customer service is not responsive and does not really speak English anyway. You have to decide for yourself whether the possibility of having to deal with this is worth the huge cost savings.

The good thing is that if you buy from Amazon, you do have some protection. If it doesn’t work, you can return it.

This probably isn’t a fair comparison, but we feel it makes sense, because both of these fixtures use the same principle of multiple bar lights across a larger area. Both are based on the Spyder design.

But ChilLED does it much better. They use MeanWell drivers and achieve a higher efficiency and higher output than Aceple. The spectrum is very similar, except ChiLED uses the more standard combination of 3000K and 5000K white diodes.

Where the AG-6000 has a big advantage is price. It costs much less than any of ChilLED’s 600w fixtures. It actually costs less than even some of their smaller fixtures. ChilLED still costs considerably less than a Spyder or Gavita, but it doesn’t come near the budget level of the Aceple.

If it’s in your budget, get a ChilLED fixture. They are much better. However, if your budget is limited, the Aceple is the one for you. When you take price to performance into the equation, it suddenly looks like a sweet deal. We still think the ChilLED is a better deal, but it is a very close race, when you factor in price to performance.

Read our complete ChilLED Growcraft review to learn more about this series of lights.

There are still very few budget alternatives to the Fluence Spyder and the Gavita 1700e. The Aceple AG-6000 is one of the better ones. Sure, we like the ChilLED lights much better, but they are not in the same budget category.

When you get down to this extreme budget level, we’ve really only found two options and the AG-6000 is the better choice. It gives you almost the same power and efficiency as the top brands, as well as a very similar spectrum, while costing much less.

Of course, there is a higher chance of a faulty light and customer service is pretty bad. That is why we gave it a somewhat lower rating of 4.2 out of 5.